Google has updated its already great Google Maps application for Android smartphones and tablets with new discovery and navigation features, with an update for iPhone and iPad coming “soon.”

The updated app takes some design cues from the popular Google Maps iPhone app that was released last December but adds in a few new features. Google says the new app will only be available on Ice Cream Sandwich and Jelly Bean Android devices and iOS 6.0+ devices.

The first new feature is called “Explore,” and it lets you browse nearby places with a few taps. The places listed are for eating, drinking, sleeping, and shopping. Google has also implemented a 5-star rating on places like restaurants and bars that appears to replace Zagat’s 30-point rating system.

Second up, Google Maps for mobile adds new navigation features that can help you dodge bad traffic conditions. Now you’ll be able to see reports of problems on the road and potentially get info about the incident. Maps also will now alert you if a better route becomes available during your drive and give you the option to re-route to the “better” way.

Notably, this release has been designed for Android and iOS tablets too. That means iPad and iPad Mini owners will finally be able to download and use Google Maps instead of Apple Maps.

Google also used this update to take away the “offline maps” feature in Android. Instead, you now can access some maps offline by entering “OK Maps” in the search field when you are viewing an area, and Google will make that available for later.

This app also does not support the “My Maps” functionality that was previously available, but Google says it will be available in future versions.

Check out the video and a few more screenshots below to get a feel for the new Google Maps experience. 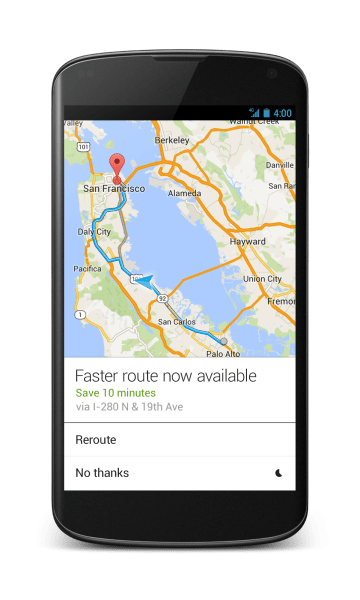