SAN FRANCISCO — When you use LinkedIn’s mobile apps today, you might not even notice the series of bounces, slides, and pops that take place under your fingers. But you’ll definitely feel their combined effect, a very deliberate manipulation on LinkedIn’s part to make their app feel special, light, beautiful, and useful in your hand.

This focus on experience was the topic of a chat today between VentureBeat founder Matt Marshall and Deep Nishar, LinkedIn’s senior vice president of products and user experience, at MobileBeat 2013.

“Mobile development is like nothing else anyone here has done in their life,” said Nishar. “What worked two years ago doesn’t work today.”

Nishar started Google’s mobile group in 2005. Today, he said, companies have to start thinking about mobile experience from Day 0.

“You have to make mobile an integral part of every engineer’s life,” he said. “People think of mobile devices as a trend. … But you can also view this as an opportunity, which is what LinkedIn did.”

LinkedIn first got serious about creating rich, beautiful mobile apps back in 2011, when it launched a radical redesign of its mobile experience on iOS, Android, and the mobile web.

“Reinvent LinkedIn as if you were building it for the first time for a mobile user” was the directive Nishar gave the designers and developers on the project.

At the time, the company was extremely bullish on the mobile web and related technologies, such as HTML5 and Node.js, creating a gorgeous iPad app that was only 5 percent native.

But this year’s mobile reboot brought a technological backstroke, with LinkedIn reverting to native technologies for the most part. Those changes were both for performance reasons — a big part of any consumer’s mobile experience — as well as to bring more pleasure and delight to end users. 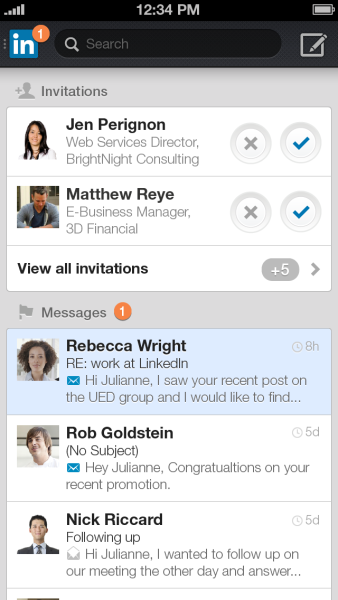 “We’ve redesigned the entire UI to do a lot more actions and get a lot more data with one tap,” said LinkedIn mobile exec Kiran Prasad in a recent interview with VentureBeat. “We’ve tried to … add a touch of delight, to make it feel good when you click things.”

A big part of that, he continued, is putting in little design and interaction touches like animations. “All the little animations, little bounces and pops, it sort of leaves me with a happy feeling,” Prasad said.

Nishar said that experience, those series of delightful qualities and little details, are all tailored for the professional mobile user. “You have to constantly reinvent what you’re doing,” he said of the HTML5-to-native switch. “We clearly want the users to have the best possible experiences that are very fast.”

Now, Nishar said, “We want to make sure that we stay as hungry as entrepreneurs … we are at the beginning of what we could be doing.”