The first thing you absolutely must do in Shin Megami Tensei IV is save. Save often and before you venture through any strange doors. You’re just a trainee samurai in the Eastern Kingdom of Mikado tasked with wiping out the demons infesting an underground cavern known as Naraku. It’s only natural that not all “prentices” make it out of training alive, and you need to accept that you’re going to die — and die often.

Shin Megami Tensei IV is different than the popular Persona and Devil Survivor off-shoots of this long-running series. It is colder, older, and not at all concerned with you boosting your social links. No, the world you find in SMT4 is crawling with hungry demons that you have to somehow convince to fight at your side long enough to fulfill your samurai duty. While it does adhere to classic role-playing gameplay found in many older Shin Megami Tensei titles, SMT4 embraces the Nintendo 3DS’s signature features and a third-person perspective to hopefully entice newer players to give it a go.

But be careful. Transitioning from other Atlus titles to the main SMT games is a rocky experience. You will have to accept that battles will go wildly out of control despite your best efforts and that leveling up is a slow trudge made much harder by unpredictable combat. SMT4 looks shiny and new, but it represents a much older style of role-playing games that you just don’t often see anymore.

Becoming a Samurai in the strangely European-looking Eastern Kingdom of Mikado requires every citizen to undergo the gauntlet trial. The gauntlet is a bizarrely advanced communication device controlled by an artificial intelligence program called Burroughs. She controls the player’s demon inventory and maintains a database of apps that you can buy to boost stats and can alter how you interact with demons. Burroughs is a vital tool as you explore the world, though she doesn’t seem to remember where she came from.

I adore the app system the gauntlet provides. Each time the hero levels up, you get a number of app points that can unlock new skill slots on the main character or provide stat bonuses for your entire party. It is a subtle way for players to customize their SMT4 experience, and after a brief tutorial, you will see very little guidance on which apps to choose.

Some upgrades also make conversing with demons much easier and allows you to ask for money rather than assistance. The conversation-recruiting method used in many older Shin Megami Tensei games definitely needed an overhaul to appeal to modern players. Before now, acquiring new demons was a verbal guessing game based on the phases of the moon and the demons you already have in your party. Now you can bribe and convince new party members with much more clarity, and Burroughs’ customization apps make the entire process much more lucrative. 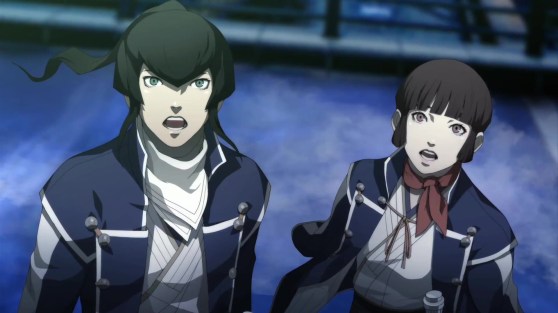 Finding success in SMT4 means accepting that battles sometimes spiral out of control. One well-placed critical attack by an enemy can trigger a chain reaction that can knockout your entire party with ease. Dungeon bosses have no qualms about using forceful, multihit moves each and every turn — and they will. None of that likely sounds fun right now, but the beauty of SMT4’s strategy is that you can turn those tactics back on enemies with a little bit of planning.

As you expand your demon collection, you can learn abilities from party members that have maxed out their skill trees. My ongoing strategy is to give the main character one of every elemental spell. You can change your skill layout any time a demon offers to teach you their moves, but holding on to a few attacks is also a good idea. If multiple demons share their knowledge with you about the same command, the player’s attack gets exponentially stronger.

Many times, the player is the first to attack in battle. If you can lead with a group-wide attack that hits the enemy’s weakness, you earn an extra move per turn. If you arrange your party in a way to let you keep exploiting that weakness, you can massage two full turns out of one round and potentially take out your enemies without them ever attacking. Conquering bosses is much easier if you can exploit their weaknesses, and it is worth your while to invest in a Burroughs app that lets you track enemy stats throughout a battle and examine their weaknesses.

My strategy isn’t the only successful way to play, though, and SMT4 provides you with many opportunities to create a combat style that suits you. My biggest problem is that I often do not take time to use stat-boosting spells in battle. Because I don’t do that, I tend to focus on an all-or-nothing attack style. Learn from my brutishness and use those buff and debuff spells!

It’s totally not Pokémon for adults

When I say that SMT4 isn’t Pokémon for adults, I mean that Atlus would very much like for me to not make that comparison (sorry). The trouble is, that’s a very apt description for the catching, fusing, and possible evolution of the demons you encounter. Fusion isn’t a new concept in the Megaten universe. If you can acquire demons, it’s pretty likely that you’ll later be able to mix and match their characteristics to make stronger (and often cooler-looking) companions.

What is fairly new is that characters you keep in your party for extended periods of time may eventually evolve into beefier monsters. I was a little dismayed when my cutesy Jack Frost turned into a hulking Wendigo, but the shocking increase in stats and level made me very happy. You can’t recruit characters that are at a higher level than the main character, but if they evolve to a higher level, they’re loyal to you no matter what. It’s definitely worth tailoring a demon to your combat needs and sticking with him, but don’t become overly attached.

Alright, so you probably won’t like the fact that you will die repeatedly in SMT4, but you will enjoy how Atlus sidesteps the messy business of making your backtrack to your last save point. When your party is wiped out in battle, you’ll find yourself at the end of an incredibly long line of miserable-looking souls. You’re on the banks of the river Styx, and Charon the ferryman is waiting for you at the docks. Only he’s really behind on transporting all those souls to the underworld. For a fee, Charon is willing to resurrect you just before the battle that killed you.

If you don’t have the money (called Macca) he’s asking for, he’ll generously start a tab for you and collect the debt when you’ve earned the required amount, or he’ll gladly accept play coins. Few games use Nintendo’s system-level credits for much at all (Animal Crossing: New Leaf being a notable exception), so it’s nice to see them not only implemented but used in an beneficial way. Macca is difficult to maintain in SMT4, so paying Charon off another way will help you.

The long path to street passes

Street Passing in Shin Megami Tensei IV is actually pretty cool. You create an ID card, complete with your stats and character name that you can trade effortlessly with other players. You can also attach a demon to your card to share with friends and eventually get back at a higher level or with fancy new skills.

“That all sounds great, and I want to start right away” you say as you furiously unwrap your game. Well, settle down. You’ll need to complete somewhere between 10 hours and 13 hours of the game before you’ll ever unlock the player cards. Unlocking this feature is loosely tied into the early story (and I won’t go into details), but I feel locking useful features behind missions and hours of dungeon crawling is a buzzkill for people looking to quickly interact with friends.

Getting lost on the world map

I’ve never been the biggest fan of the Shin Megami Tensei series use of an overworld map with little spinning figures to represent people. When the map has easily identified location options running down the side of the screen (like the Persona games do), this isn’t too bad, but you’ll spend a large portion of your time in SMT4 exploring and fending off demons on the world map.

I’ve played Shin Megami Tensei IV for over 50 hours, and I feel like I spent at least half that time struggling through accidentally wandering into very bad places on the world map. Demons will attack you along the way, and it’s easy to end up hurt and vulnerable if you venture too far into demon lairs and unfriendly territory.

Successfully building and maintaining your bank account is a perilous affair in Shin Megami Tensei IV. Demons you negotiate with want Macca, shop owners with outrageous prices want Macca, and the ferryman of the underworld will just come snatch you money away if you’ve made a previous deal with him. It’s easy to get into a tricky financial situation here, and SMT4 doesn’t make it much easier to get paid.

Unlike many RPGs, simply defeating monsters in battle rarely earns you money. You if want money from demons, you will have to ask them for it (which sometimes goes well) or complete side missions that require you to harvest and sell demon body parts. Not getting money simply by killing monsters definitely feels weird, but it’s true to the SMT experience.

To further supplement your income, you can also find and sell ancient relics scattered throughout the game. Sometimes a relic will bring a large amount of money, but I find most bring in little and that collecting pricier ones is tantamount to suicide early in the game.

You must learn to live with limited funds. You will find many purchasable supplies scattered through the world or receive them as spoils after a battle, but you likely won’t generate a comfortable stockpile.

My money problems slowly got better, but you need to know that you likely won’t have the funds to buy everything you want until later in the game.

I find that the difficulty in Shin Megami Tensei IV is its greatest feature. Like Demon’s Souls and Etrian Odyssey, you’re compelled to throw yourself back into the action, just to prove that, yes,  you can defeat that demon without ever needing to restart or revive. What makes that difficulty tolerable is Atlus’s commitment to clever combat systems and easing the penalty for dying. Having the freedom to explore and try new (and sometimes risky) strategies in battle is such an addictive yet satisfying experience. I do not regret the possible hundreds of hours I am going to continue to lose to Shin Megami Tensei IV, and I hope it has the power to win over newcomers to the franchise. I like quirky, demon-summoning high schoolers as much as the next Persona fan, but you haven’t truly experienced a Megaten game until you’ve tried to wrap your mind around the infamous conversation system.

Just learn to save.

Shin Megami Tensei IV is a 3DS game that comes out July 16. Atlus provided a retail copy of the game for this review.