SAN FRANCISCO — The number of apps is exploding, driven by a huge uptick in the number of mobile devices — and people are using those apps all day long.

Flurry, a company that provides app developers with tools to measure how much people are using their apps, released data on “the state of the apposphere” today at MobileBeat 2013, VentureBeat’s mobile industry conference here.

Flurry’s slides below show some of the data it’s collected on mobile app usage worldwide. 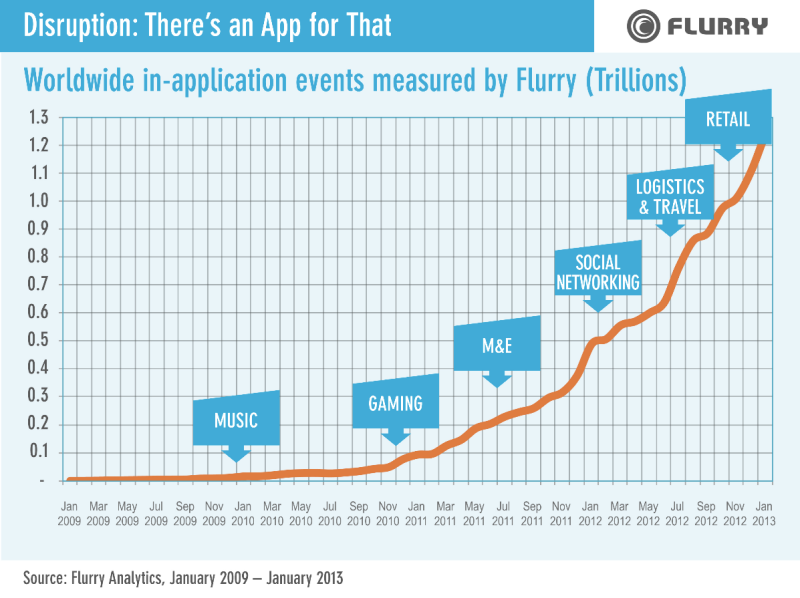 Those apps are on one billion devices, giving Flurry data on more than three billion app “events” each day. The company tracks events such as a customer starting up an app, making a purchase within the app, leveling up within a game, and so forth.

The company now collects data on 1.3 trillion different in-app events each month. The growth in app events that Flurry tracks matches the explosive growth across the board in mobile app usage.

“We’re seeing a tremendous disruption by mobile” as huge numbers of people move from the traditional web to mobile devices, Fuloria said. That’s being driven by the large number of mobile devices around the world — and there’s plenty of room for more growth.

For instance, China recently surpassed the U.S. with the number of smart devices, with 240 million smartphones and tablets in use. But that represents just a quarter of China’s population, which means potentially, there’s far more room for growth in China. Ditto in India, which has the same number of smart device users as Canada — but has 36 times the population.

Significantly, Flurry has found that app usage is driven by all kinds of apps across the board: productivity apps, games, lifestyle apps, social networking, and more.

People’s usage of apps doesn’t change much during the day, either. Although there’s a drop-off in the number of people using apps late at night and in the wee hours of the morning, some use apps around the clock.

And the mix of what kinds of apps people use remains relatively consistent throughout the day. In other words, there’s no particular time when people site down for intensive gaming sessions; they are “snacking” on games — and all other types of apps — in pretty much the same proportions all day long.

Diving into one particular demographic, Flurry revealed that mothers also use a wide range of app types — including games.

In other words, Fuloria said, “Moms are gamers, too.”

In a panel discussion following Fuloria’s presentation, other mobile service providers focused on some of the challenges brought about by this explosive growth in app usage.

“It’s certainly experiencing explosive growth,” said Josh Williams, the president and chief science officer of Kontagent, regarding the app world. “But along with that, there are a lot of pain points for developers, and for existing businesses.”

For example, there’s a lack of standards and consistency in delivering mobile advertising. No one has yet found a truly effective ad format, and more innovation is needed.

As a result, while the advertising industry spends roughly $40 billion on web advertising each year, only $4 billion of that is directed to mobile ads, said Jeff Drobick, the chief product officer at Tapjoy.

“How do you take a traditional display ad and make it relevant without distracting the audience? That’s something we all struggle with every day,” Drobick said.

“You see a lot of innovation … but there’s still a lot of directly translating what’s happening on the web to mobile, and that’s a big part of the gap in mobile monetization today,” said Williams.

“We haven’t built the killer ad format for mobile yet,” Fuloria agreed.

Matt Gillis, an executive vice president at Millennial Media, pointed out that advertisers’ priorities aren’t necessarily aligned with the way people are actually using mobile devices. For instance, many refer to the smartphone as the “third screen” after televisions and PCs.

Not so, said Gillis: “Mobile is the first screen. The tablet is the second screen.”

Gillis also noted that the pendulum has perhaps swung too far from the mobile web over to native apps. While native apps are clearly the best solution for some categories, such as games, they’re not necessarily what people want to use in all cases.

“The industry has intentionally pushed users to apps,” Gillis said, referring to those ubiquitous pop-ups on mobile websites directing you to download the company’s app. “The industry has gone overboard in trying to shift user behavior,” said Gillis.

According to Fuloria, that push is driven by the better experiences that apps offer — and by the increased engagement that companies see with app users.

I asked him if there were any drawbacks to that approach, given that apps offer none of the interoperability and open standards of the mobile web.

In other words, it looks like the push towards mobile apps shows no sign of letting up. It’s working for customers, for companies, and — with some hitches — for advertisers.