Apparently we love our smartphones. More, perhaps, than our significant others, God, or personal hygiene.

Nearly one in 10 American adults in a recent study admit to using smartphones during sex — jumping to a full 20 percent for younger adults aged 18-34. That’s not the only unorthodox time we use our phones: 12 percent of us have taken our phones into the shower (presumably in a plastic bag?), and almost one in five say they’ve used their smartphone in church.

Of course, that was just for checking their Bible apps. Right? 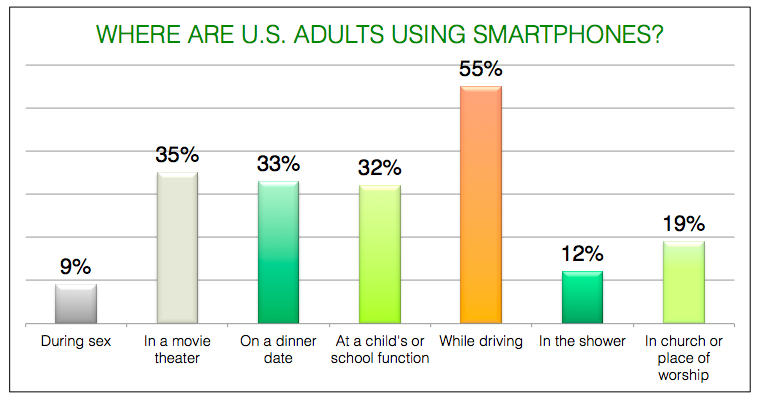 According to the 2,000-person study conducted by digital identity company Jumio, 72 percent of us are within five feet of our smartphones at all times.

“People view their smartphones as an extension of themselves, taking them everywhere they go,” Jumio’s marketing chief Marc Barach said in a statement. “And panic sets in when consumers are separated from their devices.” 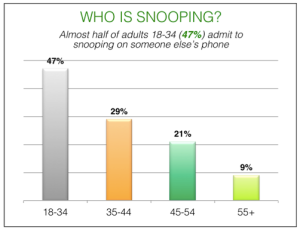 More dangerously, despite the fact that most states have laws against talking or texting while driving, more than half of us use our smartphones while driving our cars. In fact, 55 percent of Americans text or talk and drive, according to the study.

Not quite as dangerous, but possibly more annoying, 35 percent of us admit to using our phones in a movie theatre.

Interestingly, when it come to privacy, married people are more likely to leave their phones unlocked — and less likely to snoop on others’ phones. Among single people, 69 percent lock their smartphone with a password, probably because 42 percent of them admit to snooping on someone else’s phone.

Married smartphone owners, by contrast, tend to leave their phones unlocked more often, with only slightly more than half protecting their phones. And only 25 percent of married respondents said they’d snooped on others’ phones.