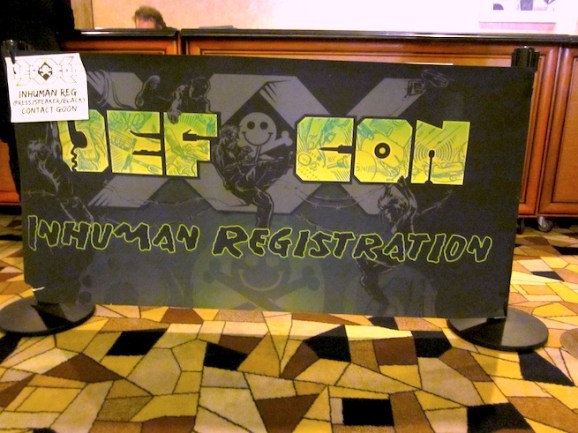 This week, Def Con founder Jeff Moss told feds that the conference is no longer open to them.

Since its start 21 years ago, Def Con, one of the biggest annual hacking conferences, has acted as the perfect environment for feds, hackers, and press to mix and chat on a seemingly level playing field. Hackers and feds come to the event in similar ways, opting to come as they are or remain incognito. Traditionally, these government employees come to Def Con to recruit or check out what’s going on on the other side of the fence. But with the fresh investigation and pursuit of former NSA contractor Edward Snowden, it seems the relationship between these two communities has become tense.

Moss, who goes by the name “The Dark Tangent,” explained in a short blog post titled “Feds, we need some time apart”:

For over two decades DEF CON has been an open nexus of hacker culture, a place where seasoned pros, hackers, academics, and feds can meet, share ideas and party on neutral territory. Our community operates in the spirit of openness, verified trust, and mutual respect.

When it comes to sharing and socializing with feds, recent revelations have made many in the community uncomfortable about this relationship. Therefore, I think it would be best for everyone involved if the feds call a “time-out” and not attend DEF CON this year.

This will give everybody time to think about how we got here, and what comes next.

Last year, at the conference’s 20th anniversary, Moss and other founders and organizers of the event decided to lift the long-standing ban on photography to shoot a documentary of the event that has been so important for many people in this community. The documentary seemed to highlight the relationships this conference has facilitated and the unique setting that allows these three very different groups (hackers, media, and government) to come together.

In addition to the Snowden matter, however, the past year has been filled with a number of hacking-oriented trials around the world. The death of activist Aaron Swartz and the call for reforms of the Computer Fraud and Abuse act and other government policies have also left their marks on this community. Snowden’s recent exposure of the NSA’s surveillance program has compounded that tension and may have led to Moss’ decision.

The same has not been requested for Black Hat, the security-focused conference that also occurs in Las Vegas in the days leading up to Def Con. We are unaware of how Def Con will ensure feds, who likely will still be in town after attending Black Hat, do not make it into the conference. We have reached out to Def Con and will update this post upon hearing back.