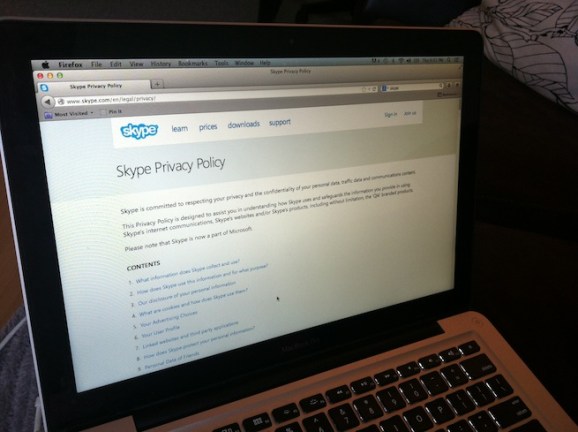 Former NSA contractor Edward Snowden has provided the Guardian with more documents pertaining to the recently revealed government surveillance program PRISM. This time, we see how Microsoft works with the NSA.

According to the documents, after Microsoft set the government up to monitor video calling in Skype (as opposed to just audio) in 2012, the amount of Skype data the feds have collected has tripled. It also shows that Microsoft created a special way for the NSA to get around the encryption in Microsoft’s latest version of Outlook. The government reportedly investigated this issue with Microsoft two months prior to the launch of the new Outlook. Futhermore, the documents reveal that Microsoft and the FBI worked together to give the feds access to its cloud storage product, Skydrive.

The PRISM program involves seven major tech companies — including Microsoft, Apple, Facebook, and Google — and others. Through the program, the government has requested a range of data from photos to videos to audio files and connection logs. In the aftermath of PRISM’s reveal, the majority of the companies named claimed that the did not permit direct government access to any of their data and only complied with data requests for individual customers, not blanket requests.

Microsoft reiterated this position today in a statement to the Guardian saying it “would not respond to the blanket orders discussed in the press over the past few weeks, as the volumes documented in our most recent disclosure clearly illustrate.” Microsoft also said that it vets all of the requests is receives “closely.”

“When we upgrade or update products legal obligations may in some circumstances require that we maintain the ability to provide information in response to a law enforcement or national security request,” Microsoft said in the statement. “There are aspects of this debate that we wish we were able to discuss more freely. That’s why we’ve argued for additional transparency that would help everyone understand and debate these important issues.”