NEW YORK CITY — When Nokia announced its 41-megapixel 808 PureView last year, the prevailing  hope was that the company would eventually bring that camera tech to Windows Phone.

Well, Nokia has finally made that happen. At an event in New York City, the company announced the Lumia 1020, a 4.5-inch device that combines a 41-megapixel camera, Xenon flash, and a plethora of other features. It may just be the smartphone photographer’s dream device.

“With the Lumia 1020 you will see things you’ve never seen before,” Nokia CEO Stephen Elop gushed.

While “41 megapixel” is largely vague, marketing-heavy jargon, essentially the Lumia 1020’s tech lets you take high-quality, noise-free shots and zoom into them in great detail. (41-megapixel shots are also massive, which is why the 1020’s software also downsamples photos to offer more reasonably sized 5-megapixel shots.) 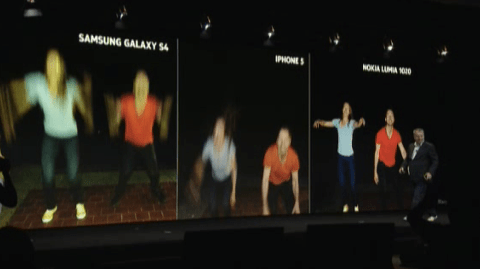 Above: Nokia shows off how the Lumia 1020 can capture motion shots in low-light situations. Pretty impressive.

That camera tech goes beyond just hardware, however. Nokia has also furnished the 1020 with Pro Camera, a new app that will give users more control over how the phone takes pictures via settings like ISO, white balance, manual focus, and shutter speed. The device also comes with Nokia’s optical image stabilization (OIS), which should allow it to take better, non-blurry photos in low light.

Alongside the Lumia 1020, Nokia announced the Camera Grip shell, an $80 add-on for the 1020 that adds extra battery life, a dedicated shutter button, and a rubberized grip for one-handed shooting. It even has a tripod.

One drawback, potentially, for the Lumia 1020 is that Nokia clearly isn’t deviating from the tried-and-true designs of devices like the Lumia 920. But whether that’s a good thing or bad depends entirely on what you think of Nokia’s previous devices, of course. It’s also not clear where the 1020 improves on previous devices. While Nokia is making a big deal about the 1020’s camera, the company doesn’t seem to be intent on pushing any of the phone’s other features.