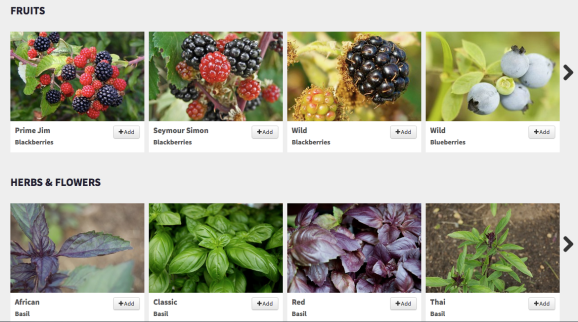 MONTREAL — Imagine there’s a $200 billion industry in North America that hasn’t really changed in 50 years. And a complex multi-level supply chain that degrades quality, increases prices, and benefits neither producers nor consumers.

You’ve just seen the way almost all U.S. restaurants get their food. And, by extension, how you get your food.

Provender, a startup launching today from Canadian accelerator FounderFuel, plans to change that. With a founding team including both former chefs and farmers, they’ve got a good shot — partly because every single chef they’ve talked to so far has become a client.

And partly because selling farm-to-chef promises to raise farmers’ profits a massive 600 percent. 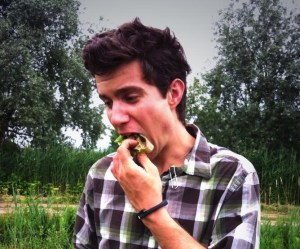 Above: Cai Rintoul, CEO of Provender

“I was a chef for a lot of years,” cofounder and CEO Caithrin Rintoul told me this morning. “You can order from a wholesaler and get the same shit as everyone else — or you can spend your whole day on the phone with farmers.”

Provender’s goal is to make farm-fresh accessible to every chef — not just the celebrity chefs at Michelin-starred restaurants who shop the early-morning farm markets for the best-quality produce. Chefs and restaurants are dependent on the quality of their food, Rintoul explains, but almost everyone orders from the same long, convoluted supply chain: farmer > broker > wholesaler > delivery company > restaurant.

Along the way, the food changes hands, gets transported, and sits in refrigerators.

Quality, naturally, suffers. And the price is jacked 300 percent from the farm.

In contrast, Provender helps farmers manage inventory the only place they want to: in the ground. Farmers — or their more tech-savvy sons and daughters — take photos of their crop as it matures. Provender’s B2B exchange shows chefs what’s fresh today, what will be picked next week, and what they can expect in a month. All chefs have to do is select what they want, and farmers deliver to their door that day or the next morning.

“We’re talking about people who really, really want quality,” Rintoul says. “As a chef … your life is dependent on how good your food is, and most chefs try to deal with farms … but it’s not easy.”

The overall trend is toward direct delivery — you can’t get a non-local tomato in San Francisco anymore — but the tools have not kept pace. Startups like Foodum, AgSquared, and Plow have addressed the market opportunity, but no one is as focused as Provendor, according to Rintoul. 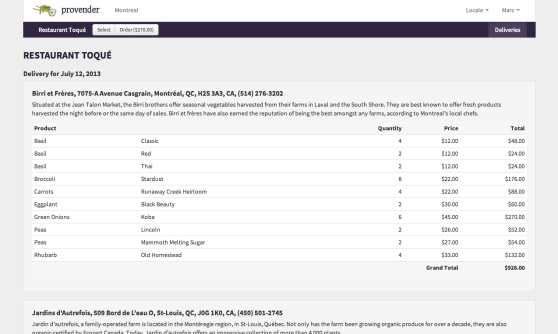 Above: A new way to order food for your restaurant.

“Others are trying to be everything to everyone,” he told me. “We’re specifically B2B, and we spent a year doing this the old school way with pen and paper, just proving the model, which is critically important.”

Produce like fruit and vegetables is where Provender is starting, but that’s not all. The young company has also tested fish markets, giving fishermen the opportunity to upload pictures of their catch immediately after hauling it in and enabling them to sell it before they dock.

Perhaps this is something only founders with real-world experience in the industry would invent. A $200 billion industry that hasn’t really taken advantage of technology to disrupt decades-old supply chains sounds ripe for disruption, but it’s not something that every young geek in Silicon Valley thinks of first when considering where to start a company.

And, in an era when we’re seeing quantified dog products, it has a stupid-big chance to change the quality of our lives. Most consumers, Rintoul said, spend more on restaurant food than they do in the grocery store.

It should, then, be the freshest and best it can be.

Still, the food industry has been the downfall of many a VC, with Rintoul himself mentioning famous flop WebVan to me. The key difference I see in Provender is that it focuses just on chefs — who spend thousands of dollars on food weekly, not just a few bucks — versus consumers.

Still, it won’t be easy.

“Ever since WebVan, this has been a fucking graveyard,” Rintoul told me. “That last mile is a real bitch … only Amazon has really nailed it.”

But Provender has a good shot at nailing it too — for restaurants. The young startup closed its seed round two weeks before its accelerator demo day, indicating keen interest from angels and VCs. And the industry experience Rintoul and his cofounders bring to the table means that this startup deeply understands the industry it’s attempting to disrupt.

And an astonishing 45 out of 45 chefs the startup talked to after launching in beta three weeks ago have agreed to come onto the platform.

Which won’t continue, Rintoul knows, but is a pretty hot leading indicator.