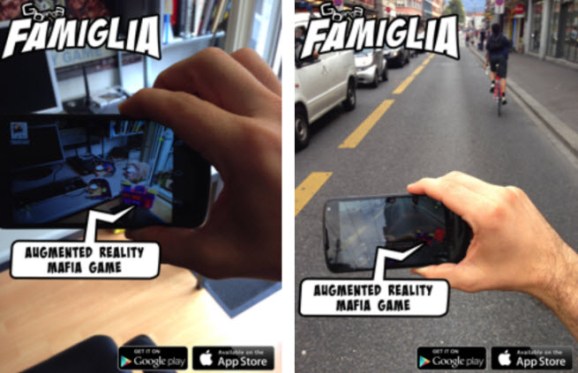 A Swiss startup has entered the augmented-reality business with the launch of its social-gaming service Gbanga on Android devices and the first game that uses that framework.

Zürich, Switzerland-based Millform’s Gbanga creates an overlay on the real world that you can view through the display on your Android device. In the company’s mafia title, Gbanga Famiglia, you can browse the environment and tap the screen to pick up loot.

“We at Gbanga believe that is a significant step forward in the development of location-based mixed-reality games and in our quest to create more immersive and tailor-made game experiences,” said Matthias Sala, chief executive of the developer, in an email to GamesBeat.

Instead of playing on a Google Map layout, as with other platforms, you can walk around in the real world as you look at your screen. In Famiglia, you take over territory, collect virtual items, and use them to become more influential. You can perform geo-based side quests that are akin to phone-booth jobs in Grand Theft Auto. You can, for instance, take a virtual-money suitcase to a bank or assemble a police car from different parts that you’ve acquired.

Millform started in 2007, and it has six employees. Sala studied context-based services as part of his computer-science schooling, and he did more research while at the Xerox Palo Alto Research Center. He believed that each player could enjoy context-specific entertainment.

His company’s rivals include Red Robot Labs, PerBlue, Grey Area, and Loki Studios. The augmented-reality sector has gotten a lot of hype, but Sala believes that his app system is different. Players can use it on their commutes or plan detours to explore new territories. But the gameplay isn’t as strict about requiring you to go to actual locations, as in other releases.

“We emphasize exploration as much as we do rivalry,” Sala said. “Gbanga is a game universe similar to what you can find in GTA, Second Life, or Minecraft. Players explore the world, find new items, trade them with friends and rivals, etc. It’s also extendable through an [application programming interface] for players with some technical knowledge to embed their own stories.”

Millform developed its geospatial world internally, and it uses real-time high-speed communications to get data from its servers. The system also taps outside location-based services such as geonames.org, local weather data, and yellow-pages information.

The company has raised $500,000 from founders and angel investors.