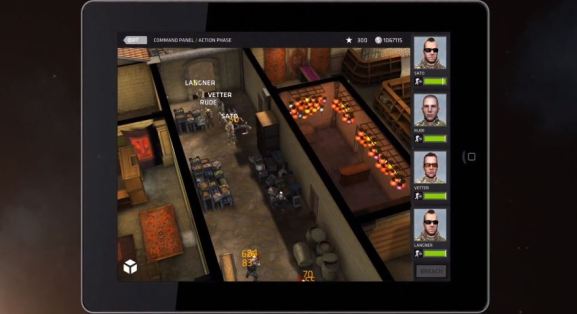 Your bathroom is about to turn into your tactical war room.

Gun Media announced today that it will release its Breach & Clear strategy game for iPad on July 18 for $1.99. That’s a special introductory price, and on July 25 it will bump up to $3.99.

Breach & Clear is modern-military strategy title that has players controlling a squad of soldiers as they break in to fortified locations and eliminate enemy targets. Players must lay out a plan and direct the special-ops forces as they infiltrate opposition strongholds.

Gun originally intended to release Breach & Clear as a free-to-play title with in-app purchases. The developer wanted to get as many people playing as possible, and it felt that making it free to download was the answer to that. In a GamesBeat interview, Breach & Clear executive producer Robert Bowling explained why the studio changed to a premium price.

“We got six months into development, and [we realized that we had to go premium] to make it the most fun it could be,” Bowling told GamesBeat in June. “At the end of the day, that’s what is most important. I’d rather have 20 people buy the game and have the most fun rather than 100,000 people download it and not get anything out of it.”

Check out the launch trailer below to see the game in action:

We’ll have a detailed review of Breach & Clear later this week.