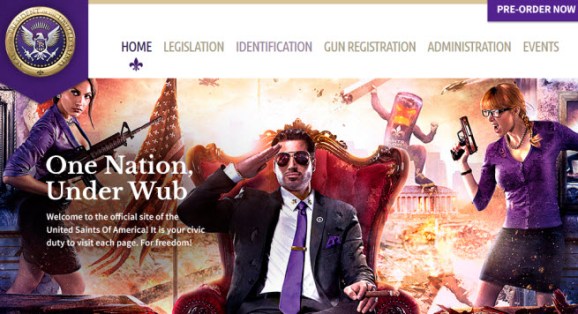 Future US and Deep Silver have partnered to bring you a comical faux U.S. government site for the Saints Row IV comic shooter game.

The Saints organized crime family have now risen to control of the White House in the next installment of the game. So media publisher Future and the game maker Deep Silver have created a site to show off what a Saints administration would be like.

The companies say, “The boss has gone from the crack house to the penthouse to the White House.”

The site’s gags include “Voting Legislation – vote on laws like clothing-optional supermarkets, new government bureaus of party management, and Saints Row characters as U.N. Ambassadors.” It also has a “Steelport Scanner” for monitoring criminal activity “such as a 60-year-old man in a leopard print speedo robbing a convenience store with a 25 lb. sex toy.” You can register your souped-up gun.