New technology that Apple is working on would enable you to project the movie you’re watching on your 4-inch iPhone screen on the wall and watch it large … and then control it with hand gestures in the air.

Apple won a patent today for integrating built-in projectors into mobile devices such as laptops, tablets, and smartphones.

Interestingly, on the same day it is rumored to be acquiring gesture technology vendor SimpleSense, Apple secured a patent that also includes using hand gestures to interact with the projected images. In addition, multiple people projecting multiple images from their devices could interact together, sharing images and data with each other in a shared virtual workspace.

Apple first applied for the patent in February 2010.

The idea behind the patent is that mobile screens are small, and sharing is hard. But if you can display these screens large, on a wall, and adjacent to others’ projections, it’s easy to see what you want to share and, with a simple gesture, transfer it from one device to another. 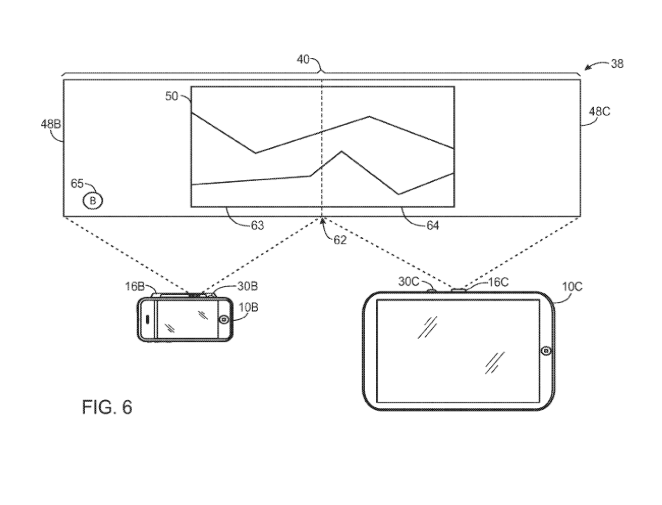 Which is all cool and everything, but I’d really like to just be able to watch The Lord of the Rings at about 55 inches with my iPhone.

The patent covers both clip-on projectors, which would certainly not be an Apple design preference, and built-in versions, which would be integrated within an iPhone or iPad and would be much more down Apple’s strike zone.

Included gestures would enable image sharing, copying data, or manipulating onscreen objects, and the assumed resolution of the gesture capture engine would recognize details such as number of fingers, orientation of the hand, taps, multiple connected motions, whether a fist is closed or open, or whether both hands are being used. In addition, technology built with this patent could sense the “shape, direction, speed, acceleration, and/or magnitude of a gesture” in order to determine what it means.

A lot of the patent sounds very similar to things Leap Motion is already shipping.

A particularly innovative portion of the technology described in the patent is that overlapping sections of screens projected from multiple devices would know they are overlapping, and could be used to align screens or potentially interact in more complex ways.