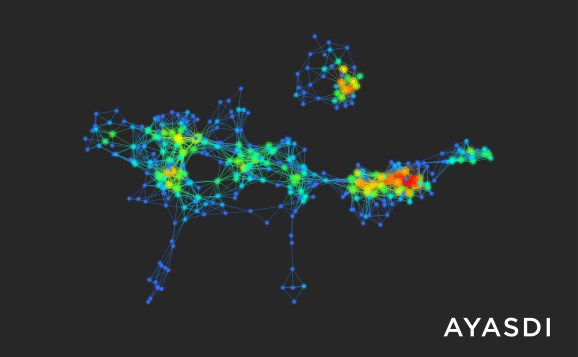 Ayasdi, the startup that burst on to the scene with the bold claim that it would use “big data to cure cancer,” has raised yet more venture financing.

Ayasdi today pulled in $30.6 million in an oversubscribed funding round, after raising $10 million in January.

When the company launched six months ago, the founders said they would work with the nation’s top hospitals and medical researchers to uncover more targeted treatments for disease.

Investors placed their full confidence in the technology. Vinod Khosla said Ayasdi had the potential to unlock “previously unattainable insights that will help solve some of our most pressing global, social, and economic issues.”

Ayasdi, which means “to seek” in Cherokee, is based on machine learning tech that was developed over the course of a decade at Stanford University. The goal was to create a product that could offer insights — no coding, scripting, or manually queries required. In 2008, a trio of founders decided to commercialize the product, and begin reaching out to hospitals and venture investors.

Ayasdi has continued to grow its customer-base, which includes Merck, Citigroup and General Electric. The company has rapidly expanded beyond health care.

The logic is that if it’s good enough for cancer researchers, it’s suitable for a variety of industries.

“At this point we have five of the top ten pharmaceutical companies, and two of the top ten oil and gas companies,” said Ayasdi CEO Gurjeet Singh by phone. Singh said they had “always intended” to tackle these verticals, and not be confined to health care.

Steve Harrick of IVP, an investor who will join the company’s board, said the company already has an “impressive foothold” on the market. Ayasdi has plenty of competition, primarily legacy business intelligence tools and existing “big data” startups.

The term “big data” has received quite a bit of flack of late. But Singh is convinced that these technologies can offer real value to businesses. He believes that data scientists spend years asking the wrong questions, and Ayasdi can help.

He offers a few examples of how the product might be used: “Some of our customers in oil and gas use us to take data from their drilling and optimize their approach,” he said.  Another early customer at the Institute for Genomics and Multiscale Biology has a team of researchers using the technology to identify the genetic predispositions of many diseases, which they hope will help them glean insights that will lead to breakthrough drug therapies.

The funding was led by IVP, with participation from Citi Ventures, GE Ventures (the venture arm of GE, which is a customer), Citi Ventures, Floodgate, and Khosla Ventures.