Before Nintendo released its megapopular Nintendo Entertainment System console, the Japanese developer released its arcade games Donkey Kong and Mario Bros. on Atari’s 2600 hardware. The results weren’t that impressive. Both games lost a ton in the port to Atari’s underpowered system. Still, those versions have a certain charm about them. 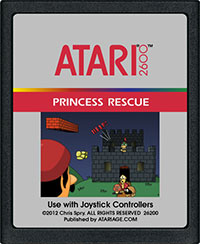 Above: The cover art for the Princess Rescue Atari cartridge.

After that, Nintendo debuted the NES with Super Mario Bros., reviving the home gaming market. Nintendo never released another game on any other companies’ console after this.

That did not stop developer Chris Spry from developing and releasing Super Mario Bros. for Atari 2600 himself.

Spry, a Portland-based animator, downgraded everything about the beloved NES platformer in order to fit it into the confines of Atari cartridge, according to a Wired Game|Life report. He succeeded, and Princess Rescue is the result.

Princess Rescue collects 16 levels based on Super Mario Bros. on a single cartridge with 32 kilobytes. That’s half the stages of the original Super Mario Bros.. Check out the game in action below:

Spry released Princess Rescue as a $30 Atari cartridge that anyone can buy and play on their 2600. It’s available to purchase now on AtariAge.com. The developer will eventually release the game as a ROM so gamers can check it out on Atari emulators.