Google should have good earnings to report later this week based on paid clicks research from The Search Agency — the largest independent paid search company in the U.S. — as well as data from Adobe’s digital marketing division.

The Wall Street consensus is revenue of $14.45 billion and earnings per share of $10.79, while analysts are predicting a 4 percent decline in cost-per-click. That’s in line with the historical model, which shows seven straight quarters of decreasing click prices.

The only problem is, it’s wrong.

Costs per click at Google are not going down; they’re going up. And two widely different and well-placed sources with access to huge amounts of paid click data have both shown me the same thing: Paid clicks at Google are going up for the first time in two years. The Search Agency’s data shows an 8.3 percent jump year-over-year and a massive 21.2 percent jump quarter-over-quarter: 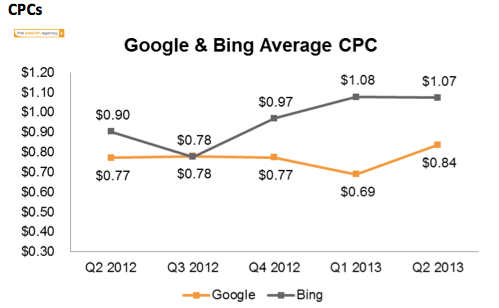 Early this year, Google announced that it was baking mobile ads right into the overall mix of Google Adwords buys, when previously they had been separate — something that industry insiders had called “the biggest change to AdWords in five years.” Google called them “enhanced campaigns,” and they certainly were designed to enhance at least one thing: Google revenue. That’s because smartphone ads, historically much cheaper than desktop, were suddenly pooled right in, driving up online ad costs significantly.

And the effect could be big Thursday, when Google reports quarterly revenue.

Based on The Search Agency’s data, Google’s impressions are up 10.8 percent from last year. Its clickthrough rate is down 6 percent, but its total clicks are up 4.1 percent. And most importantly, its cost-per-click is up 8.3 percent. That adds up to another $0.05 of revenue per hundred impressions.

Here’s the data in a chart which is easier to read, comparing 100 impressions from Q2 2012 with their 2013 equivalent.

But Google is big, really big. Like 100 billion-searches-a-month big. 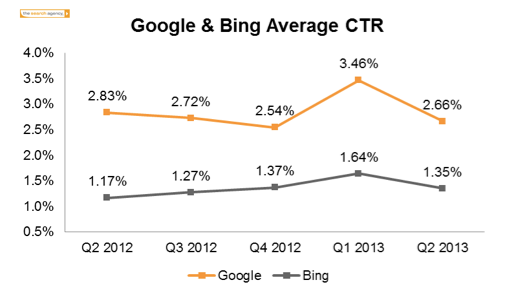 Above: Google clickthrough rate is down, but impressions are up and prices are up.

It’s difficult to predict exactly what the effect of this will be on Google’s earnings, because as mentioned above, Google runs ads all over the web, not just on Google.com. The Google.com numbers are the most lucrative, and the most important, but they’re not the whole story. Google Display numbers could be following a similar trend, or an entirely different vector. And that’s not even mentioning Motorola, now a subsidiary of Google.

But the upshot is that Google has real potential to surprise later this week.