Shawn Foust doesn’t want to design casual games. As the vice president of game design at Quark Games, he made the upcoming Champs: Battlegrounds specifically for the hardcore gamer, the type of person who prioritizes their games over any other hobby or past time.

“I’m not making this so that every single person who never cared about games can pick up my thing and then all of a sudden understand everything about it,” said Foust. “I want this game to be a thinking game for people who care about games.”

Other developers have a similar mentality. Though mobile phones and tablets are known more for the casual and social games that flood the app stores every day, a growing number of companies are taking advantage of the ever-improving tech behind our indispensable devices to deliver the type of complex games seen on PCs or consoles. While this doesn’t mean we’ll be seeing a Devil May Cry or Fallout on an iPhone anytime soon, they are starting with a genre that mobile gamers are familiar with: strategy.

Here’s a look at the new wave of hardcore real-time strategy games — all of which are free-to-play — for iOS and Android. 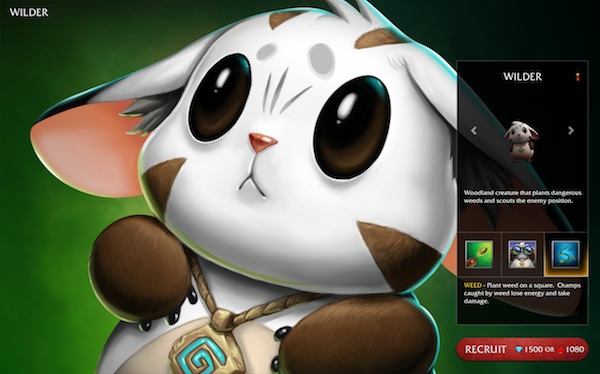 Above: Champs: Battlegrounds’ units already come with a set of basic powers and attacks.

If Final Fantasy Tactics, Square Enix’s classic turn-based tactical role-playing game, threw away the turns in favor of a real-time system while borrowing a few elements from League of Legends, you’d have something a lot like Champs: Battlegrounds. Fights take place on grid-like maps with tiles that have different magical properties, and you can upgrade your heroes either by unlocking them through playing or, if you don’t have time, just paying for them with real money. You can get all the units without spending a single cent.

“I talked to Square — some of the senior guys over there — like a year or two ago, and I was like, ‘You guys gotta remake a Tactics game,’” said Foust.“’Do a great Tactics game!’ They were hemming and hawing. [I told them] ‘If you guys don’t do it, I’m going to!’ Fast forward a year, and I showed this to some of those guys over there, and they’re like, ‘Oh this looks really good!'” [Laughs]

It took me a few minutes to wrap my head around the idea that my enemies and I are moving at the same time. The only restriction to this movement are your characters’ energy bars, as actions like moving and attacking will consume portions of it (refilling only after a couple of seconds). Above all else, Champs will favor those who can multitask their six-man squad the best — during a head-to-head multiplayer match, Foust hardly let his energy bars fill up before he gave his troops new orders. 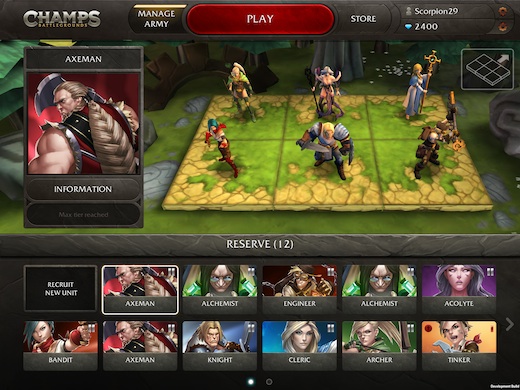 Above: Each unit has multiple upgrade paths, and you must decide which of those options are the best fit for your squad.

Though the battles are intense, they only last around five to seven minutes. Most of your brainstorming occurs outside the fights as you decide which upgrade path you want each unit to specialize in. Quark Games wants you thinking about your army even when you’re not playing.

“If you want to move games forward, you create a game that people want to play instead of whatever they’re playing right now,” said Foust. “And so that’s what we’re trying to do. I want you to put down whatever you’re doing, and I want you to pick up a tablet or your phone and I want you to play this game instead. And if I can’t convince you to do that, I’ve failed as a game designer.”

Foust’s company hasn’t always been making hardcore games. Up until its recent rebranding, Quark was known as PlayMesh, a developer of casual games like iFarm and Link4 Online. But working in in that industry was a matter of business, not passion.

“That was about paying bills, to be honest with you,” he said. “Those games are easy to do, but we [needed] to save up enough to take a shot at what we really wanted to do, right? And that’s what this looks like. … This is why we joined Quark. I didn’t join Quark to work on casual games. In fact, I wouldn’t design them. The CEO [Eric Peng] asked me to design [one], and I said the only way I would do it is if I could make something like this, otherwise I’d prefer to stay in the position I was in before.”