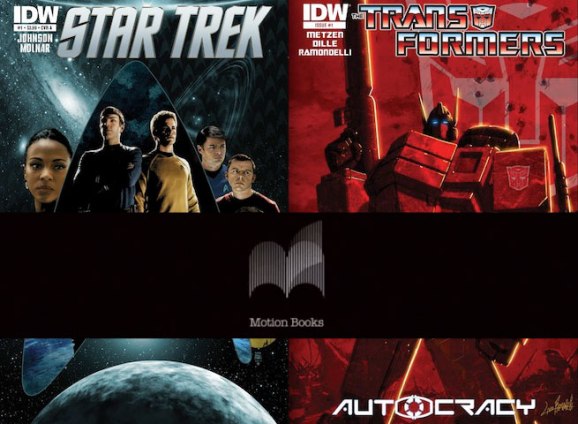 Digital comics startup Madefire announced a new publisher partnership that will bring its motion book technology to a handful of independent and licensed comic book series today, including Star Trek, Transformers, and The Darkness.

“Having major comic book publishers use our tool to adapt stories that people recognize [is a wonderful way] to show the storytelling potential of the motion book format,” Madefire co-founder Ben Wolstenholme said in an interview with VentureBeat. The announcement comes days before San Diego Comic-Con, where publishers will flesh out their plans for motion books and digital comics to a room full of die hard fans.

Madefire’s technology takes full advantage of a mobile device’s hardware to create a new form of digital storytelling that isn’t limited to turning pages. Unlike the majority of digital comic books that were simply converted from print, motion books allow artwork on a single page to move and interact with the reader — for example, swiping or tapping a touch screen or moving the device to have artwork on a page shuffle around. A motion book’s story unfolds through layers of art, word balloons, and captions that unfold in sequence — sort of like reading a book that slowly fills a blank page with text as you read.

Per today’s announcement, three notable publishers, IDW, Top Cow, and Boom Studios, will now use Madefire’s technology to adapt a number of printed comic book stories into motion books. These include IDW’s Star Trek, Transformers, and My Little Pony; Boom Studios’ Next Testament and 2 Guns; and Top Cow’s The Darkness. ITV Studios America is also producing an original motion book series by Des Taylor called The Trouble with Katie Rogers that’s exclusive to Madefire. (See the demo video below for a closer look at the aforementioned motion book titles.)

The adapted motion books from these publishers will tentatively be available on a weekly basis starting later this year. Each chapter (aka issue) will range in price from $1 to $2. Customers can buy the motion books as in-app purchases on Madefire’s iOS apps as well as through artist-focused social site deviantART’s web store. Over 40 motion books that were previously created in-house for Madefire from a slew of top creators (Dave Gibbons, Mike Carey, Ben Templesmith, Steve Niles, Robbie Morrison, Madefire cofounder Liam Sharp, and others) will remain available for free on deviantART and the Madefire iOS apps.

“We’re really trying to establish the releases on a weekly basis rather than making people who enjoy these stories — and who may have even read them in print when they first came out — wait an entire month,” Wolstenholme said. (Note: traditionally, comic book publishers release a new issue of a series once or twice a month, not accounting for unforeseen production delays.)

But regardless of the release schedule, today’s announcement marks Madefire’s first step in monetizing its motion book technology as a publishing tool. Wolstenholme said the startup will also open up its motion book tool to more people next week at Comic-Con, allowing more independent creators to produce their own motion books. Eventually, Wolstenholme said, those creators will also be able to sell their motion books through Madefire, which will provide the startup with another stream of revenue.

And while Madefire is certainly at the forefront of innovation in digital comics, it’s not the only company experimenting with new storytelling methods. Last month, major publisher DC Comics announced the creation of two new comic book formats made specifically for digital devices. The company’s first new format DC2 (pronounced DC Squared) kicks off with a new Batman ’66 title that uses ComiXology’s Guided View technology. The comic company’s second format, DC2 Multiverse, mimics the storytelling experience of a video game, with its debut series based on the forthcoming Batman: Arkham Origins video game coming in October.

Yet, Wolstenholme told me Madefire’s motion book tool is capable of producing a storytelling experience exactly like both of these new DC Comics digital formats. And considering that four other comic publishers are now using Madefire’s  motion book tech, I don’t doubt Wolstenholme’s claim.

Founded in 2012, the Berkeley, Calif.-based startup has raised a total of $2.22 million in funding to date from True Ventures and others. Madefire also has an all-star lineup of advisers, including Flipboard founder Mike McCue, former Apple SVP of applications Sina Tamaddon, Automattic CEO Toni Schneider, and others.