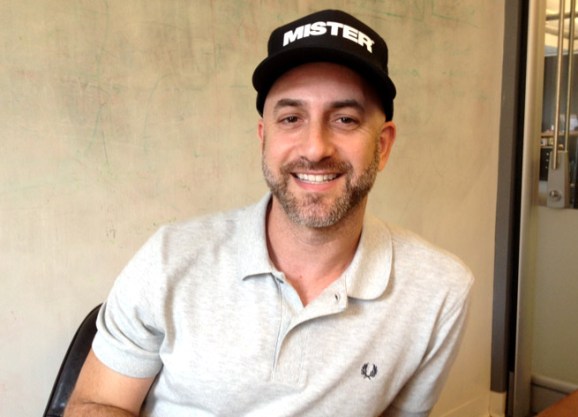 When it comes to gay meetup and chat apps, one app rules them all. That’s Grindr, the app that claims six million users worldwide and dominates the conversation when gay apps are mentioned.

That said, Grindr is limited in scope. It only lets you upload a single picture and only lets you write a 130-character description of yourself. Those limitations can give users the impression that Grindr is merely for hooking up rather than finding compatible matches.

Carl Sandler, the CEO of rival gay meetup and chat app Mister, thinks there need to be more apps in the conversation. Especially ones that emphasize maturity, safety, and respect.

Sandler believes Mister falls into this category. Mister lets you upload multiple photos and write at length about yourself on your profile. And today, he is launching a new version of Mister for iPhone (a new version of the company’s Android app is in the works too) that has a cleaner design and more features to separate it from other prominent gay meetup apps like Grindr, Jack’d, and Scruff.

“Some people just want to go to a place where they can be themselves,” Sandler (pictured above) told VentureBeat. “We want people to be themselves as long as they’re a bit more grown up and mature.”

Sandler has serious footing in this space. He’s written many articles for the Huffington Post about gay relationships and has worked in the gay tech scene for years. Formerly he worked as a VP of Gay.com, and he previously launched the app Daddyhunt.

Mister is Sandler’s vision of what a “grown up version of Grindr” looks like. It centers around a “code” that tries to push its community to higher standards (Similarly, rival app Hornet also says it is trying to make gay meetup apps more “classy.”)

“For many young gay men or people coming out, these apps are their first insight into the gay community,” Sandler said. “You don’t know anything about the gay world. Think about the message you get. … There’s so much toxicity, and it’s accepted. It’s almost become the norm.”

So perhaps the Mister code can help change that a bit. Here’s the code:

MISTER encourages users to follow the MISTER Code, a shared set of values. As a community, we agree these things are important, both online and in the real world.

Maturity: MISTERs act like adults. No games. No attitude
Integrity: MISTERs live authentically and honestly
Safety: MISTERs protect themselves and their partners, emotionally and physically
Truth: MISTERs represent themselves accurately in their profiles
Enjoyment: MISTERs value mutually pleasurable experiences
Respect: MISTERs treat each other with respect

Sandler says the code is vital to the community, and says he’s been thanked in real life by members of Mister for having the code in place.

“We’re not trying to be as big as Grindr,” Sandler said. “We’re trying to create a space for people who believe in what we stand for.”

New York City-based Mister has seven employees and is self-funded, primarily by Sandler. He said the app is not profitable yet, but Mister does offer premium accounts and local advertising to generate revenue. He also said he wants the Mister brand to eventually be “bigger than just mobile apps.”

Check out the photos below to see more screenshots of Mister’s newest app for iPhone. 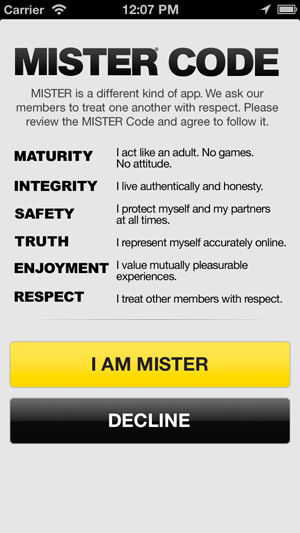