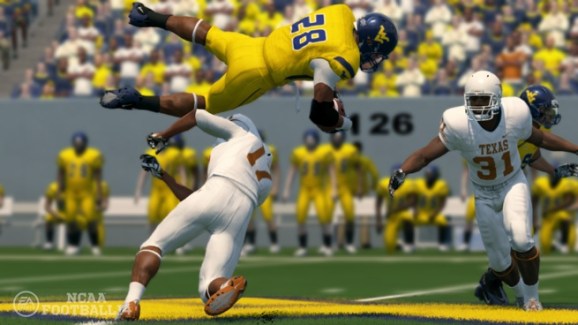 The NCAA is ending its licensing agreement with Electronic Arts, and the publisher’s next college-football game won’t have the NCAA license.

“EA Sports’ trademark licensing agreement with the NCAA is set to expire, and the company will be rebranding its college football game so as to exclude the NCAA’s name and marks,” CLC spokesperson Andrew Giangola told GamesBeat. “Collegiate Licensing Company, which serves as a collegiate trademark licensing agent, continues to have a strong relationship with EA, and in representing our partner institutions, it anticipates participating in the launch of a new game next year that features the college teams, leagues, and authentic innovation fans would expect from these games.”

“EA Sports will continue to develop and publish college football games, but we will no longer include the NCAA names and marks,” Wilson wrote. ” Our relationship with the Collegiate Licensing Company is strong and we are already working on a new game for next generation consoles which will launch next year and feature the college teams, leagues, and all the innovation fans expect from EA Sports.”

IMG College handles the licensing for major institutions like The University of Michigan, The University of Alabama, and Brigham Young University. In all, CLC represents 153 schools and NFL picks 2014. Notable schools not affiliated with CLC include Ohio State, Miami of Ohio, and Michigan State. Before the NCAA ended this agreement, it still had to make separate deals with those schools. It will likely continue to do so.

In addition to the schools, CLC also represents the BCS Football National Championship Bowl Game and many other major bowl games. That includes the Discover Orange Bowl, the Allstate Sugar Bowl, and the Tournament of Roses (or Rose Bowl).

This deal is important to CLC. Electronic Arts is the organization’s largest nonapparel licensee. Likewise, EA needs the deal with the CLC because most college football fans purchase the game to control their favorite team.

Electronic Arts did not comment about its use of historical teams in NCAA Football. The NCAA forces players to relinquish their rights to make money off their likeness as a student athlete even after they graduate. Without the NCAA license, EA may no longer have legal ground to include those teams without separately paying for the players’ likeness rights.