Developer company Telerik is launching a new tool for building flat interfaces. Under the Kendo UI umbrella, the startup is giving developers an HTML5 framework for creating truly modern-looking applications.

“On the surface, one could say that ‘flat UI’ is special and modern because it adheres to current trends in mobile and web UI design, where tastefully bold colors, clean fonts, and minimal use of shadows, rounded corners, and gradients contribute to a wholly digital yet beautiful experience,” said Telerik’s Kendo UI program manager Brandon Satrom in an email interview with VentureBeat.

“While this is certainly true, we believe that the flat UI, in the context of Kendo UI, is both special and modern because it applies this design trend in a way that also vastly improves the performance, and thus end-user experience, of mobile apps. … The end result is modern-looking apps that highlight their content and features, and delight their users with faster native-like interactions,” Satrom said.

Kendo UI helps devs quickly build mobile and desktop web apps with HTML5, jQuery, and Javascript. Over the past two years, Kendo UI has been downloaded 200,000 times in around 200 countries.

The latest release of Kendo UI also brings improvements in the platform’s tools and features for design and application performance for web, desktop, and mobile applications, as well as a scheduler widget. The Telerik team tells us that overall, the new release reduces app rendering and paint times by 30 percent.

Here’s a look at the UI: 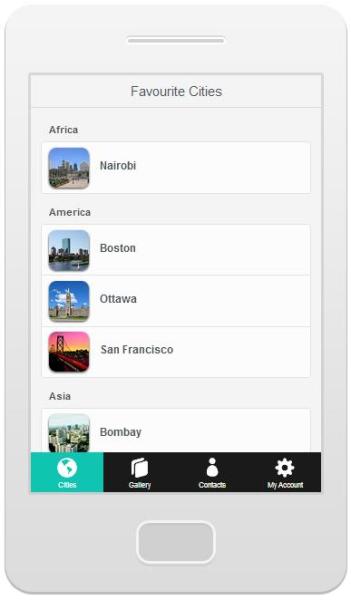 “We pay constant attention to modern design and UX trends and, where possible, try to bake these trends and ideas into Kendo UI, so that developers can automatically modernize their experiences along with us,” Satrom continued.

He also said that the new theme for web and mobile constitutes a great example of this attention and evolution.

“Of course, design trends are more than the varnish of a theme, so we’re also constantly on the lookout for ways to help developers modernize their designs through new and improved widgets,” he said.

“In our current release, we’ve added a new Facebook Mobile-style Drawer menu widget that enables developers to quickly leverage this common mobile pattern in their apps. Another example is the improved Kendo UI Editor widget, which now offers support for in-place editing, a cutting-edge feature being offered by modern CMSes and content-driven apps.

“The bottom line is that Kendo UI helps developers keep their apps modern by keeping the framework they depend on, Kendo UI, modern right in step with them,” Satrom concluded.

Telerik is hosting a Kendo UI webinar today (you can sign up online); it’ll start at 11 a.m. Eastern/8 a.m. Pacific.