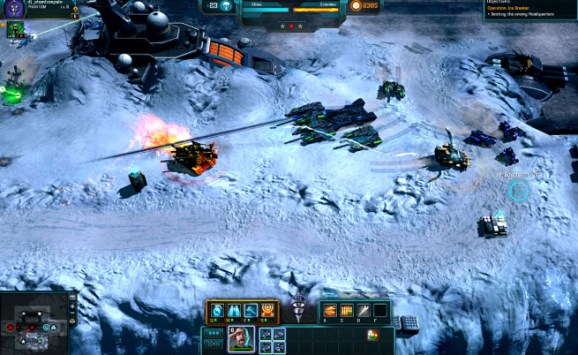 End of Nations reborn as a MOBA

The title was originally envisioned as a massivley multiplayer online real-time strategy game with massive battles. But the development went off the rails at developer Petroglyph Studios in Las Vegas. So Trion postponed the open beta and brought the development team in house. Now the game is quicker, and the fighting takes place on a much smaller scale, as with other similar MOBA titles such as League of Legends. Alpha testing is back online and the company is running invite-only beta tests.

“We received a tremendous amount of positive feedback from our last round of alpha and beta testing – and applied those learnings to the game, boiling it down to the strongest core game elements –tactical combat, session-based gameplay, and vastly improved hero units,” said Scot Lane, the executive producer of End of Nations. “Our core fans have been tremendous during this stage of early development. We are now confident we have the game the fans have been waiting for: a tremendously powerful tactical game that fans of war games and strategy will love.”

Trion said this revamped End of Nations features dynamic MOBA gameplay, a streamlined user interface, cleaner graphics, smaller teams, and more powerful heroes. That’s far different from the previews that Trion showed more than a year ago. Trion has published dynamic MMOs such as Rift and Defiance. But the market has shifted under its feet as players gravitate to free-to-play games and MOBA titles. Rift went free-to-play last month.

End of Nations will now feature smaller teams of two to four players, more focused objectives, better balance, and more emphasis on commander abilities. It will have four new classes to choose from, better matchmaking and queuing, and an ability to level up on the fly within a match. Players will be able to make adjustments to their tactics during combat.

Trion plans a wider beta test for End of Nations this summer. While Trion is shifting with the tides on MMOs, it may find a crowded market. League of Legends dominates the MOBA field, but a wide variety of players such as Warner Bros., Zynga, Blizzard, and Valve are entering the market.