Intel matched earnings expectations but reported slightly worse than expected revenues as PC sales slowed down in the second quarter.

Intel’s earnings are a bellwether for the computing industry. That industry has been mixed as PC sales drop in the face of competition from smartphones and tablets.

Intel got a big boost during the quarter from Haswell, the codenamed next-generation processor (now known as fourth-generation Core) that delivered double the graphics performance and 50 percent better battery life than previous-generation laptop chips. Haswell is one of a series of chip families coming this year that Intel hopes will revive the PC market and help it make headway into mobile devices.

“In the second quarter, we delivered on our quarterly outlook and made several key product announcements,” said Intel CEO Brian Krzanich in a statement. “In my first two months as CEO, I have listened to a wide variety of views about Intel and our industry from customers, employees, and my leadership team, and I am more confident than ever about our opportunity as a company.

“Looking ahead, the market will continue buying a wide range of computing products. Intel Atom and Core processors and increased SOC integration will be Intel’s future. We will leave no computing opportunity untapped. To embrace these opportunities, I’ve made it Intel’s highest priority to create the best products for the fast growing ultra-mobile market segment.”

Patrick Moorhead, an analyst at Moor Insights & Strategy, said, “Intel’s Q2 was a repeat of the last few quarters. PCs were down, data center revenue was up, and there is a need to reduce capital expenditures. I’m glad to see they are sticking to their guns on 14-nanometer production, an advanced manufacturing process, by the end of the year, as this is their key competitive mobile growth. ” 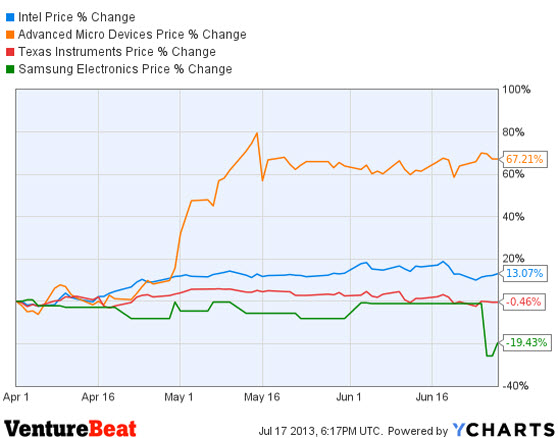 Above: Intel’s stock performance since April 1.

In the previous quarter, Intel’s earnings per share were 40 cents on revenue of $12.6 billion. That was below analyst expectations at the time. Intel said that the second quarter got a boost from the strong acceptance for the fourth-generation Core products, which are in everything from laptops to all-in-one computers.

Due in part to weak demand for Microsoft’s Windows 8 operating system, first quarter PC sales were a disaster. But you can’t write off Intel just yet. The company still spends a gargantuan $10.1 billion on research and development. But Intel said today it is shaving $1 billion off its capital spending plan this year, and it will spend $11 billion instead of $12 billion.

For the third quarter, Intel foresees revenue of $13.5 billion, plus or minus $500 million. It sees profit margins growing to 61 percent, plus or minus a couple of points. For the full year, Intel expects revenues to be flat, down from its prior expectations of a low single-digit percentage increase. Gross profit margin is expected to be 59 percent, down from the prior expectation of 60 percent. Capital spending

Intel is shifting to meet mobile device demand. It has created laptop chips that dissipate as little as 7 watts, and its codenamed Haswell processor coming mid-year is expected to be even better at power consumption. At the Consumer Electronics Show in Las Vegas, Intel said it was working with seven major vendors of smartphones who have launched Intel-based smartphones in 25 countries. But the revenue from those deals is a drop in the bucket compared to the revenues Intel gets from the PC chip business.

Former CEO Paul Otellini, 62, retired early from his job (Intel’s mandatory retirement age is 65), and he was replaced by Krzanich two months ago. 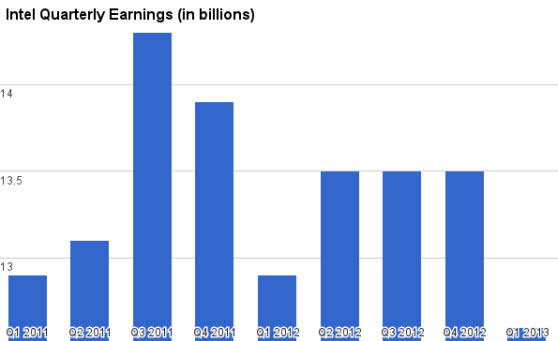 Above: Intel earnings history since Q1 2011.