Hollow customization
Breach & Clear lauds the customization and upgrade options for its weapons, and all the extra scopes, triggers, and grips do improve weapon performance and are there if you want them, but I never felt any particular need to spend much time in that menu. The default guns were more than enough for difficulties up to “Standard” (the third of five skill levels), and it felt like my soldiers’ stats always had more influence on events than their hardware.

On higher difficulties, the right weapon for the right job might factor in, but I could consistently clear maps with no losses without buying or customizing anything. Gun enthusiasts will probably enjoy the options available to them as they try to create the bullet-spitting equivalent of Excalibur, but more casual players can succeed with nothing but simple planning and strategy.

Currently unavailable maps and modes
As I said above, Breach & Clear launches with a single mode, Terrorist Hunt, which covers the titular breaching and clearing. The mission-selection screen, however, also includes two more gameplay options, Hostage Rescue and Bomb Defusal, both of which are “coming soon.” A representative from Gun confirmed via e-mail that these modes will arrive later as downloadable content.

Maybe more annoying is the fact that two of the game’s five locations (Ciudad Juárez, Mexico and Freiberg, Germany) are also slated for future DLC. Like the extra modes, those areas just sit there on the menu mocking you. It’s a little nitpicky, and the 15 maps already available offer plenty of variety, but the grayed-out options make the game look incomplete.

Which it basically is. 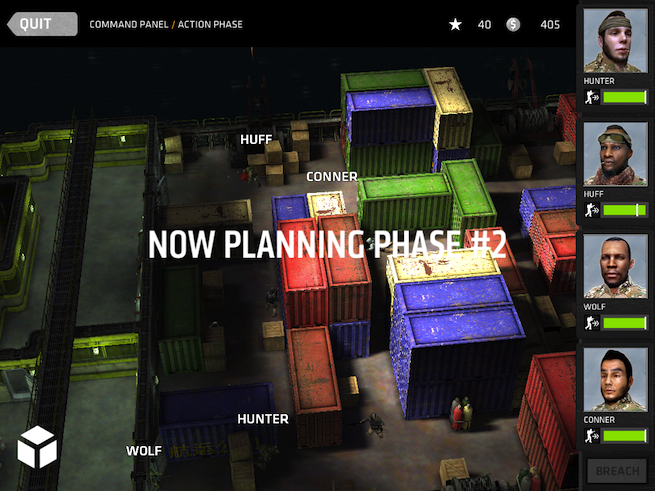 Above: Each round is called a “phase” because that sounds more military-y.

It’s boring and shallow
Terrorist Hunt was fun when I first start playing it, but even on higher difficulties, the game devolved into “point your guys at the other guys until they die.” This is inherent in the simultaneous turn-based genre, but the lack of direct control over firing made me feel like I was really just there to manage a bunch of arrows. My shorthand term for this gameplay style is “inverse rail-shooter”; whereas in traditional on-rail games, you have full control over shooting but limited movement, Breach and Clear lets you go wherever you want but doesn’t trust you with the combat. This may just come down to personal preference, but the limitations became problems and then all-out tedium.

The sound design doesn’t do much better. The in-game music is generic, alternating between the obligatory repetition of the phrase “dun dun dun” and shrill, ear-punching vocals. The voice acting never rises above rote two- or three-word phrases military types utter in a Michael Bay movie (e.g., “On it,” “You got it,” or “Moving out”). I know they’re just little virtual men on a mission and have little opportunity to express any great insights or observations about the world and their place in it, but the voices were excessively repetitive, simple, and superficial.

This leads to an aspect of Breach & Clear that actually disturbed me a little: The fact that Terrorist Hunt is completely devoid of context. This is literally a game about kicking in a door and killing everyone on the other side. It provides no sense of why this is happening other than that your guys are soldiers and the other guys are terrorists. The whole thing exists in a black-and-white, us-vs.-them vacuum chamber in which nothing exists before the moment your squad prepares to bust into the room.

Do I need 20 pages of backstory, motivation, and elaborate plotting? No. But if Breach & Clear had taken just a moment to say, “Terrorists have taken over this building” or “We’ve uncovered a plot to taint the local water supply with herpes simplex 10” (would that even work?), what happened next would feel a lot less creepy and nationalist. Even the name “Terrorist Hunt” evokes cruelty, dehumanization, and an overall sense of “let’s go get ’em” that made the game a bit uncomfortable to play. This won’t be an issue for the “theirs not to reason why” crowd, but overthinkers like me might contract a heebie-jeebie or two.

It’s hard to recommend Breach & Clear in its current state for anyone but the most devoted of tactical players or military fanboys. Maybe the upcoming modes and maps will add some variety, but as it stands now, it’s a pretty empty and shallow experience.

Breach & Clear comes out July 18 for iOS devices, with an Android version due out next month. The publisher provided GamesBeat an iPad App Store code for the purpose of this review.