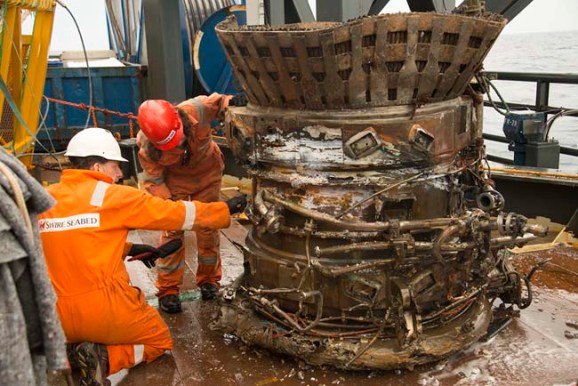 The serial number 2044 may not mean anything to you, but it’s made Amazon CEO Jeff Bezos very, very happy.

Bezos’s side project, Bezos Expeditions, confirmed today that it’s recovered a F-1 Engine from Apollo 11, the spaceflight that helped land humans on the moon in July of 1969. While the parts were actually salvaged four months ago, it’s only this week that analysts were able to finally uncover the components’ serial numbers under layers of corrosion.

“44 years ago tomorrow Neil Armstrong stepped onto the moon, and now we have recovered a critical technological marvel that made it all possible,” Bezos wrote earlier today.

While the find is a major one, what’s equally significant is how much work went into the whole recovery process. Bezos Expeditions worked at a depth of more than 14,000 feet below the Atlantic Ocean, spotting the submerged parts using a form of advanced sonar scanning.

Think about it this way: Those e-books you buy on Amazon aren’t just making Bezos rich, they’re also letting to do some really amazing things.