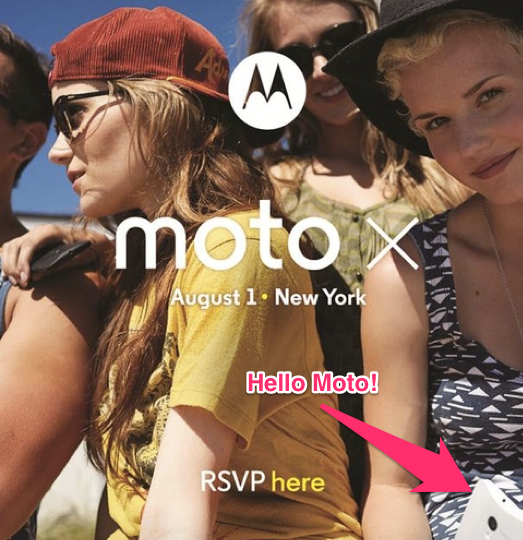 Check out the Moto X in the lower right, such a tease.

Motorola’s not-so-secret Moto X, its first Android smartphone developed under Google, will officially be unveiled in a few weeks.

Motorola just sent out invitations to media for a New York City event on Aug. 1, The Verge reports.

There’s a lot riding on the Moto X. Unlike the company’s recent Droid devices, it was conceived and developed after Google bought Motorola for a whopping $12.5 billion two years ago. Not only does Google have to justify why it spent so much for Motorola, the technology world will also be paying close attention to the Moto X itself, since it’s technically the first Android phone Google has built itself. (The Nexus flagship lineup of phones have been built by by other Android manufacturers, like Samsung, HTC, and LG.)

Most recently, a leaked video showed off how the Moto X differs from other Android phones: It’s always listening for voice commands, and it also sports a cool new gesture (just flick your wrist twice) to instantly access the camera. It’s unclear if those features will eventually make their way to other Android devices.

Motorola officially kicked off publicity for the Moto X with full-page newspaper ads right before July 4, which talked up the fact that they’re built in America and will be the first phones you can design yourself. A report from ABC News later revealed that Google will let buyers choose the Moto X’s case colors and engrave notes on its back. A Wall Street Journal report also noted that Google may spend more than $500 million marketing the phone.