What if you could sell your home, build a tree house in the woods, live off the grid, and create video games? To many, it probably sounds like a dream job. Yet that’s exactly what Alix Stolzer and Calvin Goble, the independent husband-and-wife development team Robot Loves Kitty, did for years while working on their latest project, Legend of Dungeon.

It also focused us because when I have a computer on, I can’t spend time just surfing around on the Internet. I had to spend that electricity making video games.
–Calvin Goble

Legend of Dungeon is part retro beat ’em up and part roguelike, a genre known for its punishing difficulty, randomized levels, and permanent character death. “All of the content is very true to classic Rogue,” said Stolzer. “As much as we could, actually, because I grew up playing it as a little girl. It was a heavy inspiration for the roguelike side of things.

“[Rogue] hit so many spots that did so much right in that game that we felt like if we just followed as many, as much of that magic as we possibly could, we could have players experience the same kind of things,” she added.

Legend of Dungeon also draws inspiration from classic arcade games like X-Men and Teenage Mutant Ninja Turtles. It features a four-player cooperative mode, which is something the pair said most roguelikes don’t have.

“There’s not really anything out there that has the co-op dungeon crawling that’s so strict to … Rogue’s elements that we could find,” Goble said. “So we kinda started putting this together. And we still play it together, and we still enjoy playing this game, which is awesome.”

It was the desire to create games they’d both enjoy playing that led Goble and Stolzer to form Robot Loves Kitty. Stolzer worked full-time in a number of different jobs, including one gig as an assistant to a singing chef in a chocolate shop, while Goble worked in IT and created games on the side. Goble eventually started created games full time, and Stolzer realized she wanted in on the fun as well.

“We wanted to both work on it,” Goble said. “And so we were just trying to figure out how we could set up our living environment so we could continue to make games.” 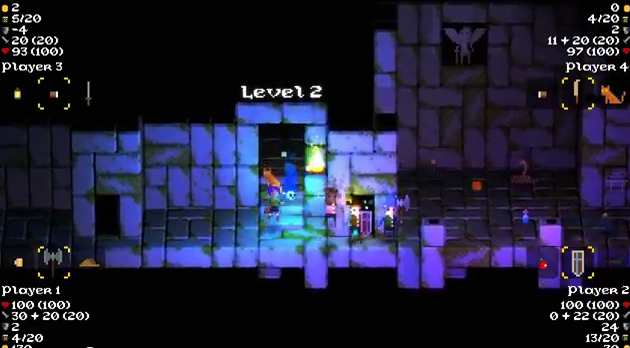 Enter Jaimie Mantzel. He owned land in Vermont and was using it to build a giant robot (seriously). Goble confided that he and Stolzer were thinking of selling their home and living off the grid so they could concentrate on game development, and Mantzel gave them the opportunity to stay on his property.

They took Mantzel up on his offer and built a tree house out in the Vermont woods, a structure Stolzer said they had no idea how to build. Goble hauled a lot of the materials on his back from their car to the spot they were building on, a 30-minute trek up mountainous terrain. They installed solar panels so they could charge their laptops and used their cell phone service to hop on the Internet. They made a stove out of a barrel and insulated rocks for heating and cooking. Showering involved warming up water and putting it in a pressurized plant sprayer, while a slanted tarp served as an outhouse.

“It had the best view of any bathroom I’ve ever been in,” Stolzer said.

“It was definitely a nice change from sitting in front of a computer all day, every day,” Goble said.

Creating games in the forest was both inexpensive and adventurous, the pair said, but it had its downsides. They could only charge their laptops for about four or five hours a day if it was sunny. If they wanted water, they had to walk to a nearby spring house to get it. Finding and cutting wood was time consuming, especially in the winter. Cooking took a lot longer. And most importantly, living in a treehouse slowed down development of their game.

“It also focused us, though,” Goble said. “Because, you know, when I have a computer on, I can’t spend time just surfing around on the Internet and doing whatever I want. I had to spend that electricity making video games. So that was interesting as well. It’s a great way to live.”

In the two-and-a-half years they lived in the treehouse, Stolzer and Goble created a side-scroller called Tiny Plumbers, along with Legend of Dungeon’s base engine and a Kickstarter demo. Their modest Kickstarter campaign was a success, raising nearly $33,000. They’ve since moved into an apartment and put the game on Steam Greenlight. It’s still in alpha, but those interested can buy the it directly from the Robot Loves Kitty website for $15 and gain access to all versions of the game and its two planned expansions.

Stolzer and Goble still think back on their time in Vermont fondly, but say if they do it again they’ll do things differently. Top on the list: designing a better way to heat water.

“It’s tempting to go back, actually,” said Stolzer. “We really miss a lot of the aspects of it. But right now we really are a little bit behind. We wanted Legend of Dungeon to be done by now. We’re working really hard to get it done.”