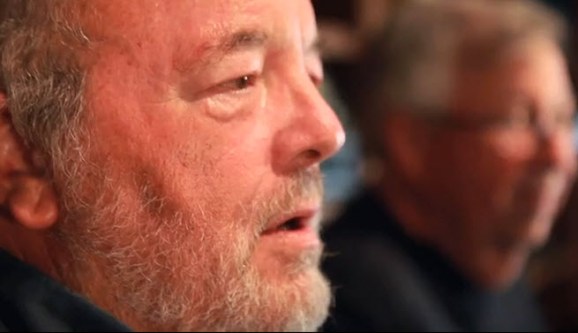 Allan Alcorn is back making a game for the first time in more than a decade — Seriously?!

Alcorn is one of the legendary wizards of Silicon Valley icon Atari and one of the fathers of the video game industry. Back in the early 1970s, he got together with Nolan Bushnell to create coin-operated video games, such as an arcade version of the early game Spacewar! Bushnell asked Alcorn to make a simple Ping-Pong game, a version of the Magnavox Odyssey’s tennis game, under a contract from General Electric. Alcorn’s Pong was the result.

The contract didn’t actually exist, as it was just a training exercise. But Alcorn was convinced he had to do a good job on the game. He started in June 1972, and it took him three months. He had to figure out how to get the score digits to work. When it was done, Bushnell thought it played well. Atari decided to put it in a cabinet and mount a coin box on it, putting the game into Andy Capps’ Tavern in Sunnyvale, Calif. Pong’s coin box filled up over and over again, and they knew they had a big hit.

So was born the commercial video game business.

Alcorn and his friend, Roger Hector, have started a Kickstarter campaign to raise $100,000 for their new game, which is being created by their partnership uGetit. Here’s an edited transcript of our interview.

GamesBeat: How long have you guys been thinking about doing the Kickstarter and the game?

Al Alcorn: We’ve been thinking about it for several months. Roger and I are good friends. We keep in contact. We thought it would be fun to go back and do something ourselves.

GamesBeat: When was the last time you worked on a game of your own?

Alcorn: I guess the last game I worked on—again, I’m an engineer, so the last one I worked on was a game called Zowie, put out by Interval Research. It was a spin-off from Interval Research. It was a kids’ playset with a video game behind it. It merged the virtual game world with the physical, real world. It got bought up by Lego. That was about 10 years ago. I’m not just a games guy. I’m an electrical engineer, so I’ve done a bunch of different things. But games are certainly notable, and I enjoy consumer electronics in general.

What happened was, the first real project I worked on at Atari happened to be a video game, and it happened to start this industry. I guess most people would have stayed there and that would have been their life’s work, doing video games. But I’m kind of a wanderer. I like challenges. When it got to be repetitive and boring—that’s how the home version of Pong came about when I was at Atari. We were doing coin-op arcade games and that got to be boring. The chance came along to do a home version of Pong. That was something new, something I’d never done — putting a game on a chip and selling it as a consumer product. So that kind of drives me.

GamesBeat: This game seems to make use of Siri. Was there something that was interesting to you and Roger about using something like Siri?

Alcorn: Oh, yeah. The whole idea of Siri, of getting knowledge and perhaps wisdom from your phone, is an interesting effect. We thought we’d leverage off of that and build a Siri-like character that’s a little bit more edgy and that could act as an intelligent agent.

GamesBeat: I was a little confused by the video. Is it using Siri for any of the answers?

Alcorn: No, no. It’s not actually using Siri. We’re providing all of that. It’s just the effect of having your smartphone talk to you and tell you the answers.

GamesBeat: Can you describe the way it works, then? You ask a question and it actually understands that question?

Alcorn: Here’s the secret of how it works. You have a deck of cards with questions on them. You pick a card, and you decide what the answer is. Then other people agree or disagree with you, and you put the card over the cellphone. The cellphone recognizes the card via image recognition and then provides a correct answer.

GamesBeat: Does that use a QR code?

Alcorn: No, we’re going to try to make it much more subtle and build it into the artwork itself. But it’s essentially the same. Every card will be unique. We can update the answers online and provide–If there’s a celebrity in there, for example, we might have their face and have them answer the question.

GamesBeat: So their face would show up on the screen of the phone or something?

GamesBeat: This is an innovative use of the existing cellphone technology. People haven’t seen this kind of thing before. Maybe that’s one of the things that need help understanding. Did the inspiration for it come from anywhere, or just out of the blue?

Alcorn: No, I think it had been fomenting for a while. I’d have to credit Roger with the concept, the general concept. I add the technology to make it a little bit more exciting.

GamesBeat: Is it trying to replicate a board game experience?

Alcorn: Yeah. It’s somewhere between Cards Against Humanity and Trivial Pursuit, more of a card-game type of thing.

GamesBeat: Is it just the two of you with uGetit, or do you have more people working on it?

Alcorn: The two of us are the principals of uGetit, but Roger has been a producer of video games his whole life. We’re tapping into some support teams to do programming and other parts of it that are much better at that than we are. It’s our product, but we’re going to have other people and other groups help us. The customers themselves, I think, will also enjoy submitting some questions.