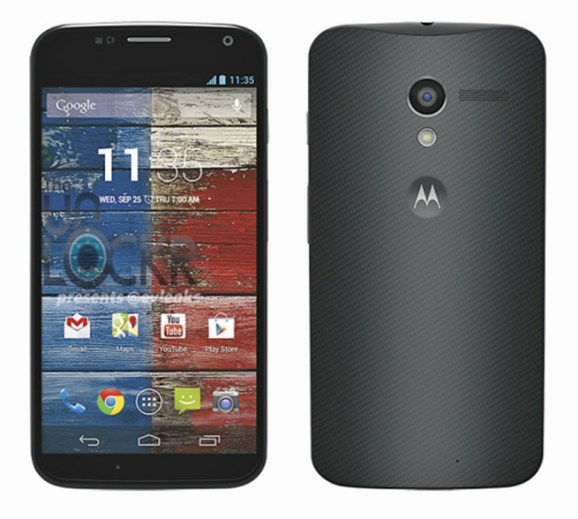 A press rendering of the upcoming Moto X

Just a day after Google invited media to attend the unveiling of the Moto X Android smartphone on Aug. 1, more pictures of the hyped device have been leaked to the web.

The above image is a press rendering of the Moto X that was leaked by @evleaks, a Twitter account that regularly posts images and details before they are officially announced. The image gives a more detailed view of the Moto X than what we saw previously when Google chairman Eric Schmidt was spotted using one in public. A leaked video demoing the Moto X also was posted on YouTube recently but has since been made private.

Google bought Motorola for a massive $12.5 billion two years ago with the promise that it could become a mobile hardware arm for Google. The Moto X is technically the first flagship Android phone that Google has made on its own, because its Nexus devices have been made by folks like Samsung, HTC, and LG.

So far, we don’t know the phone’s exact specs, but consensus around the web suggests it will have a 4.5-inch display and a 10-megapixel camera. It will almost certainly run stock Android. As for features, the Moto X apparently is always listening for voice commands and sports a new gesture (flick your wrist twice) to instantly access the camera.

Check back here on Aug. 1 to see full details on the new phone.