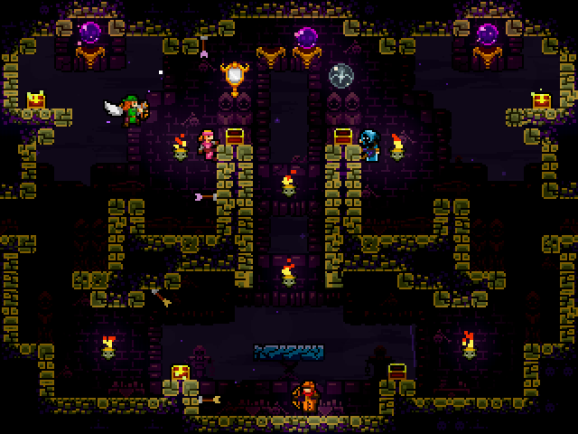 The popular Ouya game Towerfall is currently exclusive to that one console for the next six months, but that doesn’t rule out PC. It’s expected to launch on the platform in about half that time.

Developer Matt Thorson created the archery-combat platformer, which has sold 2,000 copies at $15 a pop on Ouya, according to Polygon. It launched June 25, when the Android-based microconsole hit retail. That success has led Thorson to pursue other platform possibilities, starting with PC. Nintendo, Microsoft, and Sony are all interested in the game as well.

Right now, Thorson is only concentrating on the PC release. “I think TowerFall would work great on any platform that supports multiple controllers,” he told GamesBeat. “But there are no plans to launch on other consoles yet.”

The developer is keeping the price at $15 and will introduce plenty of new content, such as two additional versus-mode levels, a possible single-player story mode, extra power-ups and characters, controller support, three-on-three team fights, and a level editor.

You might expect online multiplayer to accompany the move to PC, but the package won’t include it — at least not yet. While Ouya supports online-multiplayer titles, it currently lacks features like chat or leaderboards, which the company should have ready by the end of the year. But PC-game services like Steam make it much easier for people to play together.

“Online multiplayer is a complicated problem for TowerFall,” said Thorson. “The multiplayer modes are designed specifically for same-room play, there are a lot of technical hurdles, and it makes the game harder to expand with further updates. I want to add a bunch of single-player content for PC launch so that players without friends still have a lot of compelling gameplay to enjoy. Online support will remain in the back of my mind — if it seems worth the trouble at some point, I’ll do it, but I’m still skeptical that it would add much to the game right now.”

Online multiplayer might be almost a requirement for a lot of bigger-budget games, but it would contradict the appeal of Thorson’s indie title. “TowerFall was crafted with love, and I think people are responding to the quality of the game’s design and content,” he said. “And players seem ready for a return to local multiplayer design.”

Fans love Towerfall for what it is: a local-party game. Thorson recently brought the title to the Evo 2013 fighting-games tournament, where players responded positively.

“Nothing compares to seeing people get into TowerFall; it’s incredibly rewarding,” he said. “Like at Evo and [the Electronic Entertainment Expo], seeing players yelling and cursing and coming back to the game several times. Or seeing two total strangers bond over the game. I can’t even articulate how amazing showing the game at events has been.”

He added, “I absolutely want to foster a competitive community for TowerFall. Huge design goals for the game are longevity and competitive depth. I’d be honored to return to Evo again next year. This may be a pipe dream, but if there’s any possibility of it eventually becoming a tournament event at Evo, I would work closely with competitive players to make sure the game is suitable for that.”

Thorson said the success of Towerfall has been completely unexpected. Julie Uhrman, the founder of Ouya, called Towerfall the console’s “killer app,” and GamesBeat writer Rus McLaughlin named it one of the best five games on Ouya so far out of a library of nearly 300.

“If the PC launch is a success, the possibilities for what I can make open up tremendously,” he said. “It’s my dream to be supporting myself and making stuff this way. I want as few middlemen as possible between me and my audience.”