While Netflix is gaining praise from its original programming, it wasn’t able to hit its subscriber growth estimates, according to Netflix’s Q2 2013 earnings report.

Netflix added roughly 630,000 new subscribers for the second quarter of 2013, giving it a grand total of 29.8 million domestic subscribers. Netflix’s guidance for additional U.S. subscribers in Q2 was 880,000, which means it came in at 28 percent lower than expected. Internationally, the company added about 610,000 subscribers, bringing its international subscriber numbers to 37.6 million.

But in a letter to investors released today, Netflix seems happy with where it’s at — making sure to highlight that its original content strategy is gaining attention with 15 Emmy nominations.

Netflix’s strategy over the last few quarters has been to devote time and energy to its slate of original programming. After seeing strong viewership in Q1 from its House of Cards political drama and its horror series Hemlock Grove, the company continued its staggered release of series with the fourth season of Arrested Development and the original Orange Is The New Black. And it seems that the company is on the right track, seeing Emmy nominations for both House of Cards and Arrested Development.

Netflix is also planning for the future by signing an expansive deal with Dreamworks for children’s content and a new sci-fi series by some notable creators. In the letter to shareholders, Netflix also said it plans to produce both original documentaries and stand-up comedy specials in the near future — two areas that rival entertainment service HBO is known for doing (and doing well).

The programming strategy is part of an expansive view of where Netflix sees itself in the future of the television business. But will shareholders agree with that strategy in light of today’s earnings? Currently, Netflix stock is down over 6 percent in after-hours trading to $245.50.

We’ll have to see what chief exec Reed Hastings and crew say about the earnings during today’s first-ever talk show-like webcast, which replaces the regular earnings call for investors and analysts. It seems a bit odd to switch to this format with earnings not hitting the mark, so it’s possible Netflix execs will make a convincing case on the subscriber growth figures.

And here’s a snapshot of Netflix’s financials from the investor letter: 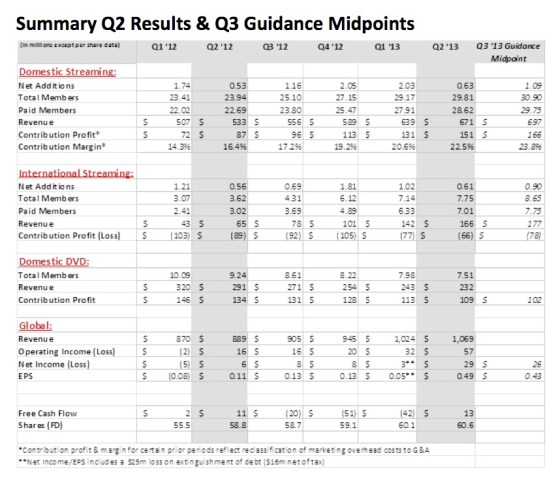