Pre-visualization may sound like a word that only technical geeks would appreciate. But it just might get your company funding.

Chris Edwards, chief executive and creative director of The Third Floor, says that using animation technology to pre-visualize what a game scene, movie, or animated film will look like is a useful tool in raising money for projects. Pre-visualization tools and staff such as those provided by The Third Floor can help those receiving a pitch really “get it” when they’re being pitched for money or go-ahead on a project. 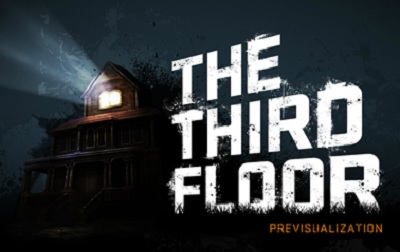 Above: The Third Floor

On top of that, pre-visualization can reduce the conflicts between a creator, who often has to iterate on the details before becoming satisfied with the quality, and the creative teams that have to build something and would prefer to do it only once.

“It sets up an adversarial relationship between the creator and the team, even though everyone wants to have the best film” or game, Edwards said. “They get caught between a rock and a hard place. Project delays can kill a studio.”

Edwards spoke about pre-visualization at the Siggraph Business Symposium in Anaheim, Calif., on Sunday.

And his company is far from the only one offering ‘previz’ technology. A number of players have emerged over the past few years offering a variety of tools, including FrameForge, Moviestorm.

The Third Floor has created a rapid prototyping tool that enables artists and filmmakers to quickly show someone what a film director or game designer has in mind for a project. Above all, pre-visualization helps project managers fix problems before it’s too late or costly to do so. If you can see what something will look like, you can stop it before it becomes a train wreck.

Directors can also use the tools to figure out if they have the right shot or not. James Cameron used The Third Floor’s pre-visualization tools to show him what images of characters — who were modified via special effects animation to look as if they were 10 feet tall — would really look like given a particular camera angle. Such “simulcam” tools save a ton of time, particularly on projects where the director can’t see real characters in a fanciful landscape.

Edwards said his company can work on 12 to 18 projects simultaneously, and it now completes 60 to 70 projects a year. Its tools were used to create the films Cloverfield, Arthur Christmas, The Smurfs movie, Oblivion, The Avengers, Iron Man 3, Oz: The Great and Powerful, and a bunch of others. The company has moved into the Chinese market, helping one Chinese firm create a fantasy film.

Above: Jack the Giant Slayer

Several times a year, filmmakers ask The Third Floor to create a full-length pre-visualization version of a film. That’s expensive, but it costs a lot less than the final film and it catches big mistakes.

“That’s why some teams like Pixar are so successful,” Edwards said.

Sometimes the work gets a little hairy. On The Avengers, the filmmakers had The Third Floor work on a pre-visualization scenes that modeled the city of New York. But after a script change, the team had to change the city to Chicago. That involved a ton of reworking.

In Hollywood, economic pressures have forced filmmakers to scale back on the number of films they’re working on and to concentrate on making blockbusters. The result is delays in greenlighting and approvals being second-guessed.

“This can work in a wide variety of industries,” Edwards said.

Edwards said he has a new startup that helps creators develop their first pitches. The hope is to fix a “broken system” in Hollywood, he said. The film Total Recall was made only after pre-visualization moved it from “on hold” to “approved” status.

The visuals are getting better, and with more work under its belt over the past seven years, the company can get work done faster. The Third Floor has now accumulated a lot of 3D assets that it can use as the foundation for future projects. As a result, the company doesn’t need to remake animated rocks or barrels anymore. The company encourages its teams to work 40 to 45 hour weeks because it wants them fresh and inspired. Its billing system is based both on standard fees and a per-week fee.

“If we finish early, we stop charging the clients,” Edwards said.

Disclosure: The organizers of the Siggraph Business Symposium paid part of my expenses to Anaheim, Calif. Our coverage of the event remains objective.