Here’s an obvious reality about privacy breaches: Companies can’t lose data that they don’t have.

Taking advantage of this realization is privacy company Abine, which has officially announced MaskMe, an ambitious browser extension that gives users the privacy-protecting power of disposable e-mail addresses, phone numbers, and even credit card numbers.

“Our goal with MaskMe was to give people a new approach to privacy that’s convenient with the way they already live their lives online,” said Sarah Downey, a privacy analyst at Abine.

While MaskMe has been in a public beta since January, the latest release marks the first time Abine has offered dummy credit card numbers, which are a part of MaskMe’s $5-per-month premium subscription.

The feature might require a bit of an explanation. Tied to your actual credit card account, MaskMe’s masked credit card numbers work a bit like the Visa gift cards you can buy:  When you make purchases with them, not only does the end merchant never actually know what your real card number is but your credit card company is also similarly left in the dark as to what you purchased. 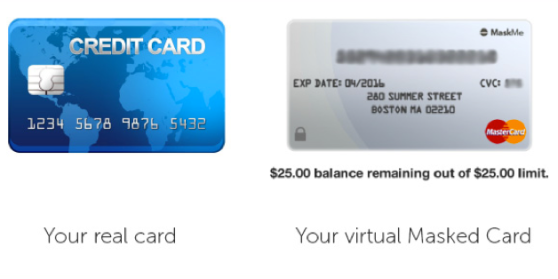 Above: Virtual masked cards leave everyone in the dark — except you.

More, when you use a masked credit card number, it vastly cuts down on the number of websites you the to give your real information to — which in turn decreases the chance that your data will be affected by the inevitable privacy breach. (The same goes for disposable e-mail accounts and phone numbers.)

“Even brands that you really trust can’t say with 100 percent certainty that they wont be hacked,” Downey points out.

This, again, is why services like MaskMe are so important: Web companies “can’t lose, abuse, or misuse” (Downey’s words) your information if you don’t give it to them in the first place.

But while that’s clear, what’s been less obvious is how people can take full advantage of the web while also retaining full control over the data they share. How can anyone get away with using a web service while also not surrendering pieces of themselves at every turn? The answer likely comes in the form of something like MaskMe.