A few more Atari franchises have new homes. The collapsing publisher sold off a couple of its well-known intellectual properties to developer Wargaming, which produces online multiplayer shooter World of Tanks, as first reported by Game Informer.

Wargaming snatched up the rights to Total Annihilation and Master of Orion by outbidding Uber Entertainment and Stardock Systems, respectively.

We’ve reached out to Wargaming to ask what it has planned for these classic franchises. We will update this story with its comment. 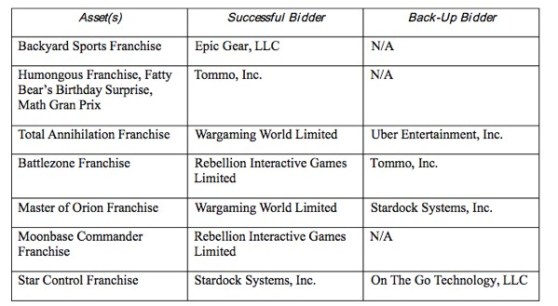 Above: The auction results for the latest Atari assets.

Total Annihilation is a real-time strategy game from developer Cavedog Entertainment. It follows the events of a future galactic war with battles on distant planets and moons. Cavedog designer Chris Taylor eventually went on to design spiritual successor Supreme Commander.

Taylor currently runs Gas Powered Games, which is a wholly owned subsidiary of Wargaming. It’s likely Taylor may get a chance to once again oversee one of his earliest creations.

Master of Orion a turn-based strategy game in the 4X genre. Publisher MicroProse released the first title in the series in 1993 for DOS and Mac OS. Players must guide their race to galactic dominance through diplomacy and conquest using diplomacy and war. MicroProse released a sequel in 1996. Eventually the rights fell to Infrogrames, which published Master of Orion III in 2003.