If you bought Radiohead’s 2007 album In Rainbows or have ever snapped up one of the various game, music, or e-book packages over at Humble Bundle, you’ve participated in the pay-what-you-want sales model. And even if you’ve done neither of those things, it’s pretty self-explanatory: Content owners offer goods and let buyers decide how much they want to pay for them.

Re:discover, creator of the open music platform Loudr, developed Bundle Dragon for its Game Music Bundle marketplace and liked it so much that the San Francisco-based label went ahead and made it available to anyone who wants to use it. The service launched last week and will allow content owners to package up their various media using a simple and elegant online toolkit and let customers name their price.

“Bundling provides a way for content creators to raise money while simultaneously giving consumers content at a great discount,” Re:discover chief Chris Crawford told GamesBeat over e-mail. “The theory is that in a short period of time, much more money can be made by offering something at a deep discount than by offering a product at a high price for a long period of time.  It also creates goodwill with fans.”

Because it’s open, sellers can lump together whatever they want — music, games, PDF files, and so on — in any combination they choose, provided they have the legal right to profit from whatever they’re selling. For example, if you and your buddies made a game, another friend composed the soundtrack, and two other guys wrote and drew a companion comic, those could all be in a bundle. Or if you and your friends all have your own bands that make totally different kinds of music and you’ve all recorded new albums, what the hell? Bundle them. 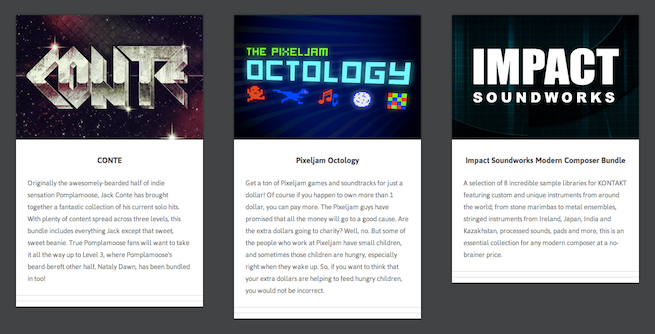 Above: Bundle Dragon will feature especially awesome offerings on its front page.

“Until now, bundling has been exclusively in the hands of people who are curating the sales,” Crawford says. “We know for a fact that good content has been rejected by these platforms — not because they’re evil or anything but because they have very specific types of bundles in mind, and not all of the content is appropriate for what they are looking for. That doesn’t mean that good bundles can’t be made with that content. One of the things that Bundle Dragon does is give those ‘underdogs’ a chance.”

Content creators can sign up for free at the website to create their own personalized subdomain ([pagename].bundledragon.com). Bundle Dragon doesn’t have a browse feature. Unless the site administrators feature a particular set on the front page, it’s up to merchants to get the word out by directing people to their storefront’s URL. This gives control to merchants and keeps shoppers from accidentally stumbling upon someone’s seven-volume bundle of tentacle-centric fiction.

While it’s free to register and create listings, Bundle Dragon takes a 15-percent commission on all sales on the site.

Registration opened before the platform launched, and as of Friday, Crawford says that the site had about 480 sign-ups. I created an account to check out the system, and guess what? It’s really easy to use.

Crawford doesn’t believe that Bundle Dragon is in direct competition with more established sites like Humble Bundle but sees it as part of the natural progression of content-distribution systems.

“People were hosting movie clips on websites before YouTube, but they had to handle all that hosting, uploading, and coding themselves,” he says. “People were hosting sound files before SoundCloud, but the same thing was true. Humble Bundle will continue to run their own site, but there are tons of people out there with great bundle ideas who just don’t have the resources to build a site from scratch, work out payment processing, offer customer support, etc. Bundle Dragon is now the toolkit for those people.”