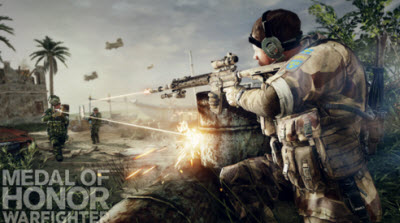 Above: Medal of Honor: Warfighter

GamesBeat: Medal of Honor just didn’t have the same magic, then?

Gibeau: I don’t think it had the same team dynamic. It didn’t have the same number of iterations behind it. The leadership on the team was different. Ultimately, I think Battlefield had more differentiation, and it had a tighter and better culture. That’s what I think led to the difference there.

GamesBeat: It’s easier to make the decision to double down on Battlefield. At some point, though, it also seems like you run out of people, if the strategy is only to double down like that.

How do you look at things like opportunity costs in that context? If you have 30 people, what would you do with them? Should you put them into enhancing Battlefield’s DLC nine months down the road or something?

Gibeau: You ultimately have a finite number of leaders and a finite number of talented people. You have to make sure that they’re deployed in a way that gives them the best opportunity to succeed. My philosophy has been to get into a position where you have the right team size and the right amount of time to deliver on quality.

Doubling the team doesn’t get you — you can’t deliver a baby twice as fast. There’s a point in time where too many people get on a project, and the law of diminishing returns sets in. Quality declines if it becomes too hard to manage. You’d rather have a smaller team with a longer period of time to work on a game.

When we think about opportunity costs, we think about the strategy in front of us as a company. What are we trying to do? What new ground can we break? Should it be a new IP? Should we try a new platform? Should we go into a new genre? Again, we take that team dynamic and team composition very seriously. If we have 30 people, we’ll look at it — does it make sense to make Battlefield Premium? Does it make sense to start up a mobile-game team? That’s the constant process we go through.

The good news is, you can start new projects with a small team to figure out if there’s a hot prototype here. Then you can pile on folks there to take it to scale. If the prototype doesn’t work, you move on to something else. It’s kind of kill early, kill often, and then only the strongest ideas survive. That’s when you can start to scale up your production. We have a fairly rigorous greenlight process. We have a methodology that’s served us well.

Above: Plants vs Zombies 2

GamesBeat: EA has stuck with mobile over the years. You made the big acquisition of Jamdat and stayed with it and grew through the iPhone and Android era. What makes that something that’s a worthwhile investment alongside things like Battlefield, where it’s easier to see that it’s EA’s kind of thing?

Mobile seems like it’s always had this promise waiting sometime in the future. It’s also difficult in other ways, with something like 800,000 apps out there. The firepower on each title doesn’t necessarily translate into the same guaranteed result in the market, where you can shoot to No. 1 and stay there 10 years in a row. Every six months the top mobile ranks have changed.

Gibeau: They change, but you can have a hit in mobile that can sustain for two years. In the case of The Simpsons and The Sims, we’re seeing some of the highest results we’ve ever seen in the revenue on those projects, and they’ve each been in the market well over a year.

There’s a couple of things to note about the mobile business. First, we got into it early on because we believe that as a company, the best thing we can do is be platform agnostic. We go where the audience is. We go where we can build great games. On mobile devices, that’s never been more true than now. We’re seeing console game levels of return, financially, on these projects. We’re seeing audiences that are vastly bigger. Our creative teams are intrigued by designing games for mobile devices. The touch screen, the technology — the technology on the next wave of tablets is going to be near-console-level in terms of graphics performance.

Our view is, we want to build FIFA experiences, as a universe or an ecosystem, across all platforms. We’ll have them connect and interoperate. If you wake up and grab your mobile device, you can have an interaction with the world of FIFA through your smartphone. Later in the day, you might play it on your PC or your console. That’s all happening now. The idea that customers have multiple games in their lives and they like their games to persist across all of them — we think that’s an essential truth going forward. It’s what we’re betting on and what we’ve built our organization around.

Nothing is going to slow down mobile for a while. The adoption rate of the technology is growing. The penetration rates are still low on a global basis. They’re growing fast, but there’s still a lot of room to grow the business. The capabilities and the trade-out of them are constantly renewing and refreshing. It’s not like the social business, where you hit a wall and there aren’t many more desktop PCs to get on. As these get faster and faster in terms of their capabilities, it moves more into our sweet spot.

In a world where there’s 800,000 apps, that’s where brand power and intellectual property and having a network matters. EA is in a good position for that. You’ve heard of FIFA or Madden or The Sims or Plants Vs. Zombies. The fact that we can stitch all that together inside a network gives us an unfair advantage in a world of proliferating titles.

GamesBeat: Half the people who attend GDC now are indie developers. There are so many more than there used to be. What is the future of big publishers such as EA amid so many indie developers and indie games? Can you take advantage of them?

Gieau: Independent developers are driving a lot of the innovation in the mobile channel. And I don’t think you can overstate how big that is. Mobile and tablets have lowered the barrier to entry for a lot of the most creative people in the industry. As a result, it’s a really great time to be an indie. You’d have to go back to the early days of gaming to find a time when there was this much accessibility and creativity pouring into our art.

EA’s Chillingo studio assists independents in developing and publishing their games for mobile and tablets. Chillingo assisted Rovio with Angry Birds [before EA owned it] and helped Zeptolab get Cut the Rope to market.

At EA, a growing percentage of our revenue comes from mobile blockbusters like The Simpsons Tapped Out, Real Racing 3, and The Sims Free Play. The teams making those are among the most talented in the industry.

But when it comes to developing and serving AAA games for PC and console, the number of indies that can year-after-year put games in the top 20 is relatively small. Blockbusters like Battlefield, FIFA, Call of Duty and Assassin’s Creed require large teams and budgets.

It’s like fielding a Formula One team. There are lots of talented drivers out there and great engineers who can design fast cars. But the capital required and talent required to compete on that level dramatically reduces the field.

It’s now clear that AAA games and mobile will co-exist. Some people went to E3 saying that the tablet killed the console. Most have stopped saying that now. Everyone I know plays both. Mobile games and consoles are on terrific growth trajectories. I think that independent developers will continue to flourish. Indie games on mobile and tablets will continue to get more sophisticated and the audiences will continue to scale massively. As that happens, developers of AAA titles will learn how to integrate the creativity we’re seeing from the independents.