Andrey Kovalishin is the cofounder of Hunter Hamster Studio

Snail Bob features a cartoon snail named after the illustrious Bob Marley. One key to the game’s success has been continuous testing with customers in a wide variety of demographics. However, the primary driving factor behind getting new players and earning their loyalty has nothing to do with fancy analytics or shady free-to-play monetization strategies. No, it’s humor. A cartoon snail facing constant danger is making families laugh and become emotionally tied to the game.

Random gameplay mechanics have paid off

We developed Snail Bob on the fly without a solid game strategy, experimenting with various game elements, mechanics, and humor for each level. This haphazard variety from level to level has turned out to be a well-loved trademark for the franchise. But on the flip side, we faced longer development time since each level had to be programmed separately. Additionally, because of the uniqueness in each level, it was originally nearly impossible to take advantage of a level editor. That has improved, though some special coding is still necessary. Based on fan feedback, though, it’s worth it.  We’ve found a good compromise between uniqueness and development speed.

After launching the franchise in 2010 and seeing more than 600 million playthroughs, we have learned a considerable amount about what works well and what doesn’t. Here are some of the key things that we’ve learned. 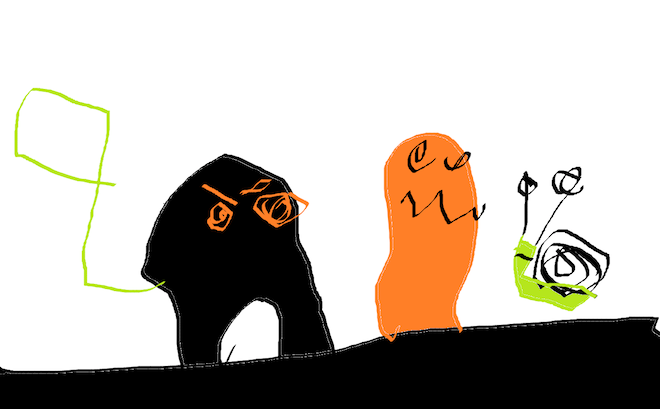 Above: Children have sent in numerous drawings of their adventures with Snail Bob.

We want players to look forward to the next funny situation or animation. The poor snail dies in a myriad of ways, and unexpectedly, that is what fans like. To make the game even more humorous, our composer, Dmitry Petyakin, created witty banjo music to accompany the snail’s antics. Fans have sent us numerous new antics for Snail Bob, so we’ve learned that we are engaging with them; and it’s wonderful that they feel they are contributing to the game design.

One of the key things that has helped our game get in front of people worldwide are smart publisher partnerships that will get your game in front of millions. Just as important is the help we get translating the game into key languages.

Marketing support per publisher is imperative as well; and each publisher will handle marketing in ways that support their audiences. Publisher Spil Games took a lighthearted approach and shares fun stats with consumers about the snail, including how he dies! Building that connection with players drives loyalty and increases their game play time. Examples of some easy statistics Spil Games has created about the slow snail have included:

Use statistic tools to keep track of what’s going on in your game, on which level most of the players get stuck, what is the length of the game session, and so on. Use this data in your updates.

Test your game at all stages of the development, and target your main audience. For us, it’s kids and grandparents. If they understand the game, anyone will understand it. In our new iOS game, I tested it on my 18 month-old son. Because he could play the game, complete the first three levels independently, and enjoy it, I deemed it “ready” for the public!

In many games, players receive stars for the fastest completion of a level. We decided to take a different approach. The stars are well hidden, and the player has to solve small puzzles to find most of them. The added replay value for those players who want to collect all three stars grows every time.

Use your games to build a community of loyal fans. It’s not difficult, but it’s very effective and will help when an update or new games comes out.

Flash as a test platform

Use Flash as a platform to evaluate the success of your game. You can use Flash to make the game fast, quickly release it, and then get feedback from players. And if the game is successful on Flash, you can move on to mobile.

And one very last piece of advice: Let everything in life inspire your game development. In our iOS version, we’ve added even more references to movies, music, travel, family, and friends. Families love the pop culture references tied to a slow-creeping snail. The more diverse our life experiences are, the more creative games we’ll make.

Andrey Kovalishin (left) cofounded the Hunter Hamster Studio with Maxim Yurchenko, which develops the Snail Bob franchise, in 2010. The studio is located in Bryansk, Russia.