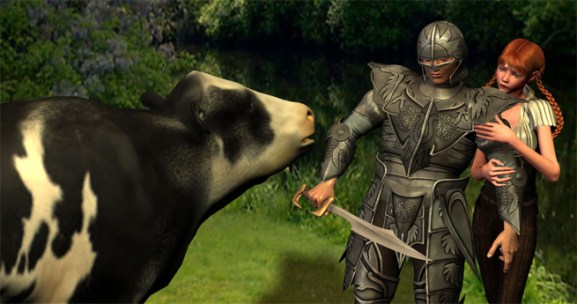 Over 2,000 cows die per minute in RuneScape 3, according to the publisher.

Over 2,000 cows go to that big green pasture in the digital sky every minute in RuneScape 3, the free-to-play massively multiplayer online role-playing game from U.K. publisher and developer Jagex. That’s a lot of burgers — 3.5 million per minute, according to a recently released infographic.

Now that the latest chapter of the game has officially launched, Jagex is sharing some statistics from the franchise’s 12-year history. People have created more than 220 million player accounts since RuneScape first launched in 2001, the publisher says. Players kill an estimated 208 bosses, earn more than 307,000,000 experience points, and craft nearly 62,000 weapons per minute.

On the technical side, Jagex claims RuneScape 3 uses about 60GB of bandwidth a second. It also has over 4.8 million words of text available in five languages: English, French, German, Spanish, and Brazil-Portuguese.

The launch of RuneScape 3 kicks off the “Battle of Lumbridge” event, which features player-driven dynamic content in which two factions compete to collect “divine tears” for renown.

In addition to the new content, the update includes a new interface system and audio and camera improvements.