A lot of the smartphone buzz as of late has been focused on the Google’s Moto X phone, which observers expect to be revealed soon. But it appears Google and Motorola are still committed to making some other interesting, powerful devices. The Droid brand is well known and helped initially bring Android to the world, so Verizon is still tapping that brand to help sell phones.

Among the three new Droid phones in the lineup, the Maxx is the most exciting because it has some of the best battery life we’ve ever seen advertised. But it needs thorough testing before we truly believe those claims. Verizon claims that 85 percent of Maxx owners will hit 48 hours of battery life with “mixed usage.” The last version of the Maxx had a touted battery life of 32 hours. 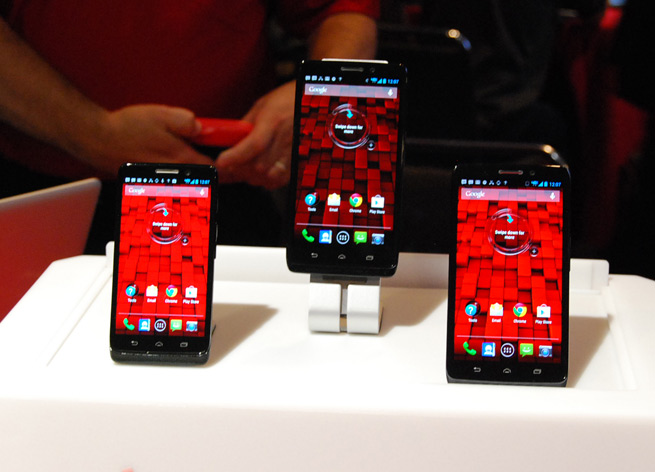 Here’s what we know about the three phones in terms of specs:

In addition to excellent battery life, the Motorola X8 chip offers us a glimpse at how Motorola is trying to differentiate itself from other Android manufacturers. It’s a custom chip using a Qualcomm CPU core and an Adreno GPU core, and it also sports a single core dedicated to language processing. That enables intriguing features like the ability to shout out voice commands while the phone is in standby (something we also saw in the leaked Moto X video).

“It’s not about one device having one thing over another,” a Motorola spokesperson (who wouldn’t tell us his name) told us at the event. “We want them all to have everything. We wanted them to match each lifestyle.”

On top of the basic specs and what you get with stock Android 4.2.2 Jelly Bean, Motorola and Verizon have added a few additional features to these phones. These include touchless controls with Google Now, Droid Zap that shares phones and videos with nearby Android phones with the Zap app, “active display” to automatically detect when the display should light up, and Miracast support for wireless streaming to compatible smart TVs.

Anyone who preorders or buys one of these three phones between today and Sept. 30 will also get six free months of Google Music.