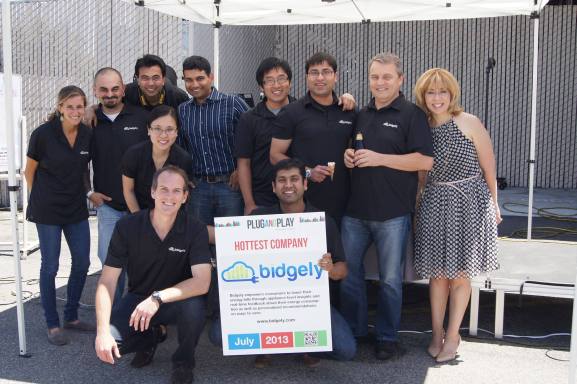 The Bidgely team at the Plug and Play accelerator.

Bidgely has raised $5 million to help people gain control over their energy consumption.

The startup’s technology collects data from smart meters that record a home’s electricity consumption and breaks down how much energy each appliance is using in real time. Its “disaggregation” algorithms measure how much energy was used at what time by what appliance and identifies the greatest sources of waste.

Bidgely’s recommendation engine combines this data with social and demographic information about the user to offer practical suggestions, such as “This is the 30th time you ran the clothes dryer this month. Cutting down your laundry loads to half will save you $134 a year” or “Replacing your refrigerator with an Energy Star compliant refrigerator will save you $180 a year.” The recommendations are prioritized and factor in current utility rates to quantify the benefits.

“We want to leave no excuses for all of those among us who have always wanted to do their bit to reduce their energy footprint, but didn’t know how,” said CEO Abhay Gupta to VentureBeat.”We firmly believe we can pinpoint issues in people’s consumption patterns that will push them to make real and permanent lifestyle changes, and have fun doing it.”

The platform runs in the cloud and requires no hardware or software to download. All the information is presented in dashboards on desktop, iOS, and Android, and users can see visual representations of their energy use. Information is tracked over time, and you can see how much overall energy you use, how much energy each appliance uses, the costs of energy, downtime energy demand, and future projections. Gupta said that prior to this, consumers only had access to whole-house consumption information. To get down to appliance-level, one had to install expensive plug-level sensors.

One in three households in the U.S. now has a smart meter. Installations are consistently going up, and the Institute for Electric Efficiency (IEE) estimates that 65 million smart meters will be deployed by 2015. However, there have been doubts as to whether smart meters actually reduce energy consumption. When they were first installed, consumers didn’t have access to the data from their energy meters. A study conducted by Consumer Digest found that “smart-meter conversion represents little more than a boondoggle that is being foisted on consumers by the politically influential companies that make the hardware and software that are required for the smart-meter conversion.”

Then in 2011 the White House issued the “Policy Framework for a 21st Century Grid” to encourage customer access to electric energy usage, in an effort to “save energy, ensure privacy, and shrink bills.” This call to action opened up opportunities for a company like Bidgely to access and make use of smart meter data. Carbon dioxide passed a “long-feared milestone” in May 2013, surpassing 400 parts per million, and individuals, businesses, and governments alike all need to reduce their usage.

Khosla Ventures, a firm known for supporting green-tech companies, led this round. Khosla also invested in Bidgey’s first $3 million round in late 2011.