The new-economy Internet company did it the old-fashioned Business 101 way: increasing income and radically decreasing expenses. A quick look at the company’s consolidated earnings statements of operations shows exactly how. 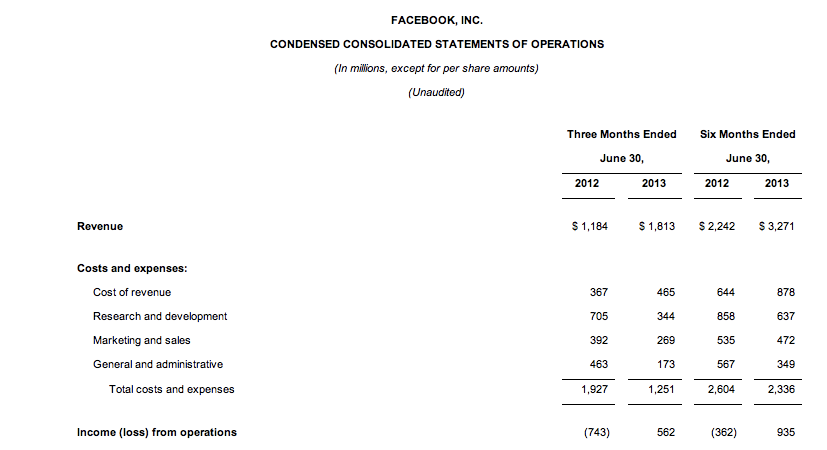 Above: Sheryl Sandberg is the business brains behind Facebook. She’s the company’s COO and its newest board member.

All told, Facebook’s expenses of running the business of the world’s largest social network were down almost $700 million, year-over-year, from Q2 2012 to Q2 2013, turning a $743 million loss from operations to a $562 million income from operations.

Of course, it’s helped by the fact that the year-ago quarter was probably Facebook’s most expensive ever as Facebook built out its offerings and spent heavily to make its post-IPO months successful. But still, impressive.

At the same time, Facebook increased the numbers on the positive side of the ledger, growing income from negative territory to a healthy $331 million in net income.

Sadly for Facebook shareholders, not all of that $1.3 billion swing shows up in Facebook’s profit. You do, after all, have to pay taxes when you make money, as opposed to building up tax credits when you lose money. But you can bet all that hard-nosed gritty old-fashioned business work of reducing costs and building revenues is the big reason Facebook is Wall Street’s darling today.