Electronic Arts has some gigantic properties in the video game business, including FIFA Soccer, Star Wars Battlefront (an upcoming title under license from Disney), and Respawn Entertainment’s widely acclaimed Titanfall. The man who has to make the biggest decisions about those releases is EA Labels president Frank Gibeau, who runs the division at Electronic Arts that produces most of its blockbusters.

Among Gibeau’s big titles coming this fall are Titanfall, Battlefield 4, the latest batch of EA Sports titles, and the zany shooter Plants vs. Zombies: Garden Warfare. That’s a big slate, but EA faces more competition than ever from all directions. If the publisher is going to win, Gibeau has to make the right bets.

Gibeau is often named alongside chief operating officer Peter Moore as a candidate for EA’s CEO job. The company is searching for John Riccitiello’s replacement, who left in March. Longtime former EA CEO Larry Probst is executive chairman. But EA is running on autopilot in part because of executives like Gibeau, who has worked at the software giant since 1991. We caught up with him for an in-depth interview. Here’s the second of two parts of that wide-ranging discussion. See part one here. 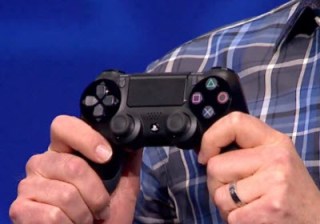 Above: The PlayStation 4 controller.

GamesBeat: It seems like you guys, as EA, can believe in a digital ecosystem around games. If you’re Disney, you can believe in transmedia. You can do toys and films and whatever. You guys have the Need for Speed film. When do you step outside that?

Gibeau: We have an embarrassment of riches in terms of intellectual properties at EA. Then, you couple that with the ones that we rent or have partners with — FIFA, Madden, Star Wars. And then that leaves the last room, which is something completely new, something you never heard of before. We have bets there as well. We have three to five bets in the next console cycle that we’re very excited about. They’ll be very ambitious projects. We’ll want to get them out early in this next cycle. You’ll hear more about them in the future.

GamesBeat: Mark Cerny, the PlayStation 4’s lead architect, gave this interesting speech in Barcelona where he was talking about how long it took — maybe a year — just to get a prototype on the PlayStation 3, especially in the early stage. With the switch from the Cell microprocessor to x86 chips in the PlayStation 4, everybody already knows the tools and how to make PC games. The time to prototype can go down to zero, basically, right? Or very short. I wonder if that’s proving to be a big advantage in this generation. The technology is more familiar. Is that helping you guys?

Gibeau: Absolutely. The power of these machines — certainly with the PS4 — is going to be realized a lot earlier in the life cycle of the system. PS3 was extremely exotic in terms of the development environment. It was very powerful if you could master it, but it was like 3D chess as far as getting everything nailed. Once you got it nailed, it was incredible, but it took so much time and learning to get there.

This time around, it’s a more familiar architecture. It’s a very high-performance architecture. It allows us to do things like bring Frostbite over efficiently and add a lot of new technology to Frostbite, from effects to rendering to storytelling, that allows us to get to high-quality games much earlier in the life cycle. We’re excited about the x86 environment. The games you see right out of the chute will be powerful products. They’ll be maximizing the hardware very early on. Consumers are going to win here because in years one, two, and three they’re going to see some extremely high-quality games.

GamesBeat: It seems like a very complex business still, though. Is it hard to operate without a CEO?

Gibeau: Well, we have a CEO. He had a tour of duty at EA before, which went OK. He doesn’t operate like an interim CEO. He’s running the business. He has an experienced group of people in leadership positions here. We had and have a sound strategy. Larry has come in — we’ve worked with him before — and we really aren’t missing a beat. We had a strong E3. We put together a strong plan. We’re guiding to a strong outcome.

I can’t comment on the process and the other things we’re doing there. I can tell you that he doesn’t feel interim and it doesn’t feel like we don’t have a CEO. We definitely have a CEO.

GamesBeat: The console transition is in the works. Does it feel comfortable to you in general?

Gibeau: I think they had a great reception at E3. There were a lot of articles being written about how the tablet had killed the console going into E3, and that hasn’t proven to be the case. Demand is high. The scenario of playing games in your living room on a big screen has not gone away. It’s very resilient. People love it. Mobile can be complementary to it, not cannibalistic.

Both Xbox and Sony did a good job at E3, showing distinctly different visions, which is good. It’s always good to have choice. The architecture is very high performance, so we’re going to be able to create experiences that gamers haven’t seen before. We’re going to be able to do new things. Having worked on these consoles for a long time, to finally have them out in the open, out in public, is awesome. Seeing the positive response has been great.

GamesBeat: You said at E3 that Sony was having a good show. Did you catch any crap for that?

Gibeau: [Laughs] They had a good show. I think it was a factual statement.

Above: The Nintendo Wii U

GamesBeat: What about Wii U? Are there conditions under which EA could find that an attractive market?

Gibeau: Sure. We’re good partners with Nintendo. They’ve been good partners to us. We published four games on the Wii U so far. They have to grow their audience. We’re observing what’s going on in the Wii U. We never count Nintendo out. We have nothing to announce about new games, but we’re observing the Wii U. Our focus right now, though, is nailing the PlayStation 4 and Xbox One launches. That’s where most of our attention is going.

GamesBeat: Once upon a time, you talked about the gambling market and whether that would be a question EA would figure out. Have you decided what to do about going into online gambling since there is this connection to social casino games and the like?

Gibeau: We continue to look at it. We publish free-to-play casino products. We’ve looked at building games in that space. We’ve looked at the real-money segment of that. There’s a lot of challenges in it. It’s very complex, both from a business standpoint and from a regulatory and legislative standpoint. Again, we’re observing it. We haven’t ruled it out, but we haven’t ruled it in, either.

GamesBeat: When it comes to Star Wars, are you going to tell me what you’ll do with the Battlefront game? Can you give any hints to all the fans?

Gibeau: Take all the goodness DICE is bringing to Battlefield 4 and imagine that’s being applied to Battlefront. But we can’t just slap the license on it. We’re not doing that at all. Battlefront is going to have a lot of unique features. We’re going to add a lot of new stuff and new ideas. We’re well down the path of development on it. As soon as we’re ready, we’ll tell you more.

GamesBeat: What do you think about e-sports right now? League of Legends is very popular. The people behind it are almost making it look easy to run a game. They just collect all this money. It seems like no coincidence that a huge e-sports movement formed around it.

Gibeau: I think e-sports and that category of product drives a lot of behavior inside the gaming ecosystem, like what Twitch.tv is doing. A lot of those video views are matches and tutorials on how to play and get better. I love it. There’s a lot of people inside EA’s development organization that participate in e-sports and like it. We have some categories like shooters and sports games that are opportunities that haven’t really jumped on the stage yet for e-sports. We’re looking at multiple opportunities there. But I think it’s awesome. I think it’s great for the industry to have this type of activity. It brings more attention and audience.

Above: PopCap’s Plants vs. Zombies T-shirts.

GamesBeat: Casual-game developer PopCap Games has a lot of things coming this year. Are you happy with where it stands? Things there were sort of quiet for about a year after you bought the company. Do you see it becoming something like DICE or BioWare?

Gibeau: Absolutely. These guys are a premier, world-class developer. Very strong culture. Very high production values. This is a big year for PopCap. We took this last year and spent it building Plants vs. Zombies 2, which is already in soft launch in some territories. Early reviews have come out. Edge gave it 9/10. The user scores from the soft launch are good. They’re working on new versions of Bejeweled and Peggle. They’ve been busy. This summer is a great opportunity for us to show off a lot of their intellectual property. They’re building new IP as well. It’s not just about Bejeweled and Plants vs. Zombies. They’re part of the EA family and portfolio, but we’re going to keep them PopCap and keep them unique.

GamesBeat: You no longer have the NCAA license. How does that affect EA? Why would a deal like that unravel after so much time?

Gibeau: Honestly, the only real change is that we won’t have those four letters on our game next year. We had a good run with the NCAA, but, clearly, the NCAA is fighting some bigger battles right now.

We anticipated this day would come and are well under way making the next game with the Collegiate Licensing Company. So we are definitely in the college football game business next year, and I hope we keep making them into perpetuity. Next year’s game will have the same conferences and features that fans have come to expect, plus a lot of new innovation. There’s a dedicated fan base out there who love college football, and we want to keep making it for them. And personally, I want to keep making the game because it’s the only way I can get USC football back to its former glory.