This morning the electronics retailer offered up the first official confirmation of the new Nexus 7 by putting pre-order pages online. The 16 gigabyte model starts at $230, while the 32 gigabyte model is $270.

For the most part, it looks like previously leaked details about the new tablet were correct. The Asus-built tablet sports 1.5 gigahertz Qualcomm Snapdragon S4 processor, 2 gigabytes of RAM, and a 1080p 7-inch screen. That’s a surprisingly sharp resolution for a 7-inch tablet — the 7.9-inch iPad Mini still sports a relatively archaic 1,024 by 768 pixel display — and the internals make the tablet on par with the Nexus 4 smartphone.

The new Nexus 7 is also powered by Android 4.3 “Jelly Bean,” a slight Android upgrade that Google is expected to reveal officially in a few hours at a press breakfast with Android and Chrome head Sundar Pichai.

Best Buy doesn’t have any release date information yet for the tablet, so that’s one confirmation we can look forward to from Google’s official announcement.

Compared to the previous model, the new Nexus 7 looks more refined and is slightly lighter by around 20 grams. We’ve seen plenty of small Android tablets hit the market since the Nexus 7 debuted last year, but the older model still holds its own. Now with faster hardware and a better design, the new Nexus 7 should be a no-brainer purchase for anyone seeking out a new Android slate. (When it comes to upgrading from the previous model, though, the decision isn’t as clear-cut.)

We can blame the improved hardware for this Nexus 7’s higher price. Last year, Google had Amazon’s Kindle Fire in its sights with a $199 price tag for the original Nexus 7. While the Kindle Fire remains a threat, Google likely doesn’t feel the need to push its new tablet as aggressively.

Additionally, the wily gadget hounds at Android Police have managed to get their hands on the new tablet. Check out their unboxing video below. 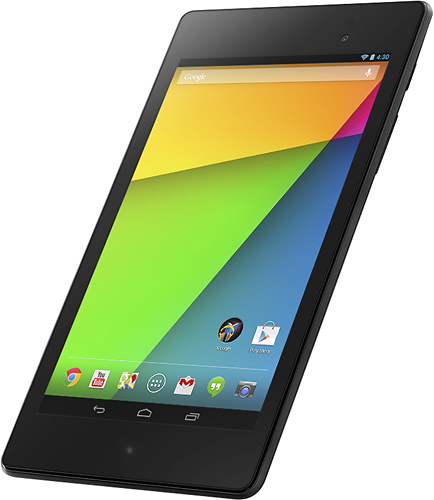