Remember when Facebook used unsuspecting users’ images in ads for 55-gallon barrels of Passion Natural Water personal lubricant and had to pay users to settle a class-action lawsuit?

Yesterday Twitter launched its TV ad platform to a wider audience. Unfortunately, the graphic it used to promote the new platform included perky fawning tweets from Twitter users about a coffee commercial, including “This @baristabar ad is giving me the coffee shakes. Looks so good!” and “I wish I could make fancy lattes like in the @barristabar commercial,” and “What is the song in the new @baristabar commercial? I love it!”

The only problem is, the tweets were faked.

As the sharp-eyed Jeff Elder at SFGate noticed, the tweets were from real users but did not appear on their timelines. And the Twitter users — whose names and likenesses were used to promote topics they didn’t know or care about — were now on record via Twitter’s blog as going ga-ga over San Francisco’s fictitious Barista Bar. 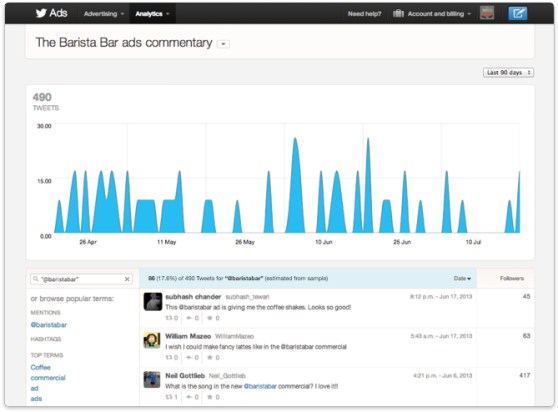 And tweeted out to more than 1.5 million people, of course.

Interestingly, I followed the Barista Bar trail, which leads to a half-built “let’s talk #Twitter” WordPress blog with a “Twitter Addict” header, default WordPress blank install copy, broken Google Adsense ad blocks, paid SEO links in the footer, and a claim to not be “affiliated with Twitter® or the excellent Barista Bar in San Fransisco [sic].” In addition, there are a couple of references to Twitter Ads and an unmistakeable Twitter style, but the site was supposedly designed by “Moon Bingo,” an online gambling site based in Belize. 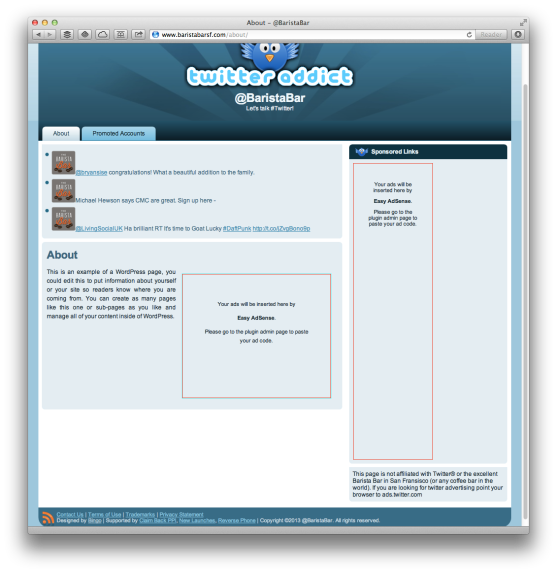 Above: The “Barista Bar” website. Note apparent paid SEO links in the footer, and design by “Bingo,” a Belize-based online gambling site.

Odd, to say the least.

The Twitter users weren’t happy to learn that they were, apparently, big fans of Barista Bar:

“It’s disturbing and has no place,” one said

“The heck?!? First time I read about ‘barrista bar.’ Not a native english speaker. Never even used the word ‘fancy’,” said another.

Twitter has since changed the names of the users the tweets are attributed to. And a source I spoke to said the original names likely came from an early version of the promotional image that was used mistakenly.

But I wonder if the company will also want to change the Barista Bar Twitter account, a demo account the company has used before when introducing new products out of a completely understandable desire to not use actual companies for beta projects. The reference appears to be to a coffee bar in Twitter’s offices, as you can see in this Foursquare location whose address is the same as Twitter’s.

Perhaps Twitter should at least change the BaristaBarSF website, which appears to have been made by a 5-year-old amateur website designer and contains those odd, seemingly-paid footer links.

It’s likely it was made by some design agency the company employed years ago, but it doesn’t seem at all in keeping with Twitter’s usually high design standards. And the part about it being designed by an online gambling company based in Belize is just plain weird.