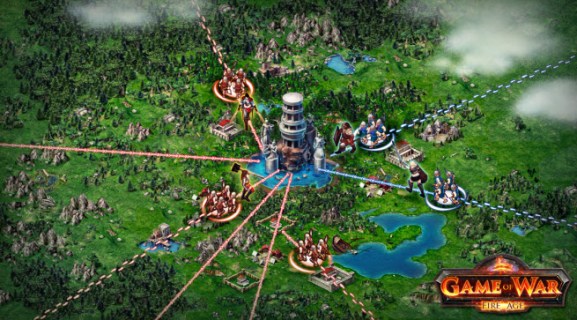 After more than a year of effort on its biggest game yet, Machine Zone is launching its free-to-play Game of War: Fire Age today on Apple’s iOS platform. Among the features is an automatic translation engine that allows players from different countries to communicate and band together in alliances. That enables global gameplay and a chance for one player to literally rule the world.

Everything is built to facilitate mass battles with an unlimited number of participants fighting in real time. Players can team up in alliances of 100 people and attach their alliance to a kingdom. Different kingdoms can vie for the throne, and the winner can be crowned the king of the entire game. Hundreds of thousands of players can gather in the same space in the massively multiplayer online role-playing mobile game, the company estimates.

“We wanted to put an incredible number of people together in the same world, and we invented the technologies to make that happen,” said Gabriel Leydon, the chief executive of Machine Zone, in an interview with GamesBeat. “This is a sign that mobile is becoming a more mature game platform.”

This kind of investment could become the norm as mobile games such as GungHo Online Entertainment’s Puzzle & Dragons bring in $110 million a month in revenue. That title is so successful in Japan that GungHo is valued at $15 billion. But Leydon wants to witness the birth of truly global mobile games.

The multiplayer empire-building game requires you to construct a city, raise an army, feed it, craft weapons, and forge alliances with other players. It is similar to titles like Kabam’s Kingdoms of Camelot, but Leydon said that the company tried to raise the bar in making a next-generation mobile game.

The parallelized group chat translation system is capable of taking phrases in chat and translating them on the fly. For phrases that it doesn’t understand, it farms the job out to players, who can do the translation themselves. If they participate in correcting the translation, the players can earn extra goods like silver, food, ore, and alliance loyalty points.

The company spent more than a year crafting the game, using funding that it raised from venture capitalists. Besides the real-time translation engine, Machine Zone also built a sophisticated communications platform into the game. Players can send threaded emails, text chat, make comments, and share their feats on social forums. That creates sophisticated political intrigue, from spying to 24-hour defenses. Now it’s harder for someone to catch you off guard while you’re sleeping or working.

“It is very social,” Leydon said.

Machine Zone also made the game so that it plays in real time. That involved beefing up the company’s server resources and software. The 2.5D graphics (viewed from an angle from above) look pretty.

The title is an exclusive for the Apple iPhone, iPad, iPad Mini, and iPod Touch. Past games include iMob 2, Original Gangstaz, and Global War. All are role-playing games that earned followings among hardcore gamers, giving Machine Zone more than 40 million downloads. But the graphics were primitive, and the games didn’t truly have global audiences.

Rivals like Kabam and Kixeye are sure to be working on their own ambitious games.

“We really want players to get a feel for what it is like to rule over real people,” Leydon said. “The whole game is about servicing that goal. Because the people in your alliance are real, the pressure is more intense.”

The company has been testing the title for months in countries such as France, Singapore, Australia, and Mexico, where it’s been a top-grossing title. At any given time, you can see a lot of activity, with icons for armies moving across the page as players send their citizens out to harvest farms or their armies out to seize strategic points such as wonders. If a faction holds a wonder for six hours, they will own it for the next three days. Owners of wonders can fight for the throne of a kingdom. Each kingdom can have tens of thousands of players. And their owners can fight for control of the entire game.

In contrast to games like Kabam’s The Hobbit, you can see the armies move and watch the action on a strategic level. The game stops short, however, of depicting animations of actual battles. Each player has a hero who helps them in combat, but another player can defeat a rival in battle and capture a hero. The player who lost the hero can put up a bounty for some to retrieve the hero. Then an alliance can launch a fight to rescue the hero. Such incidents stir the pot, creating enemies and friends across the game. In an alliance store, you can earn currency that you would normally have to pay for.

A team of about 80 people on Machine Zone’s roster of 95 employees built the game over 19 months or so. In that sense, the title’s budget is as big as many console titles from the last generation. The team watched the players in the beta and iterated on features. The title is built on a thin client that can be updated and fixed rapidly. Over time, the company will add dynamic events.

“We effectively built a real-time Facebook network and added a game on top of it,” Leydon said.

So far, the results are good. On average, players engage with the game two hours a day, 14 hours a week. They play 10 12-minute sessions per day. Players are incented to join alliances. Leydon said the game can be “reskinned” for other genres now that the platform has been built.

“We’re finding that mobile players have more time to spare than they thought if the game is good,” Leydon said. “I want this to be the best online game experience, period.”

Here’s a video of the game below.