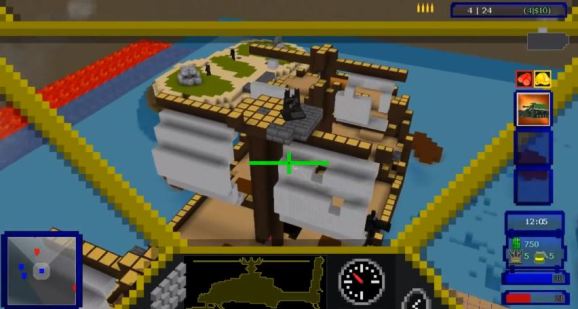 A player flying a helicopter in Guncraft.

The kids today love two things. They love Minecraft, and they love first-person shooters. Naturally, it was only a matter of time before a studio or two figured out that the key to great financial success is to combine those two things.

That’s where Exato Game Studios comes in with its block-building shooter Guncraft. The company is taking the game to the biggest digital-distribution store for PC games, Valve’s Steam.

The developer released Guncraft earlier this month for $15 on PC. In Guncraft, players build their own levels, weapons, vehicles, and characters to use in a variety of different modes.

Guncraft will launch on Steam on Aug. 9 with a handful of new features. Of course, it’ll come with achievements and leaderboard support, but Exato is holding a contest for players to design Steam Trading Cards for the game.

In addition to the Steam features, Exato is also introducing a new racing mode in Guncraft where players can drive around, Mario Kart style. Gamers can race alone or even with two people to a vehicle just like in Mario Kart: Double Dash for the GameCube.

All of Guncraft’s other features will make the trek to Steam. Players can still create their own levels, weapons, and characters and then blow it all up. It will have online and LAN play for its eight different multiplayer modes.

Players that don’t want to wait (and don’t care about digital trading cards) can get the game now on Exato’s website.