If you want complete data privacy, here’s a bit of advice: Keep your data out of the cloud.

Another option, though, might be to use something like Plug. A tiny, almost completely nondescript device, Plug turns your whole computer into a mega Dropbox, letting you access all your files from any computer, smartphone, or tablet.

For Severin Marcombes, the CEO of Plug parent company CGC, the mission behind Plug is to make the experience of using it so seamless that you forget it’s even there. “We’re trying to do something for non-geek people. I want someone like my sister to use plug without caring about whats in it,” Marcombes told VentureBeat.

As Marcombes explains it, Plug is a bit like what Dropbox would be if it extended beyond just a single sharable folder. When you download a file to one device, Plug automatically gives you access to it on all of your devices.

Marcombes, however, is quick to stress just how different Plug is from Dropbox and other cloud-based storage services. “Right now people are still having a problem deciding whether to put something in Dropbox or in their hard drives. It’s not natural,” he said. 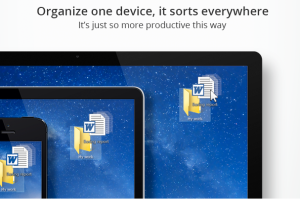 The comparison certainly hits home: One of the biggest problems with Dropbox is that, if you want to make sure you can access a file from afar, you have to consciously decide to move it to your Dropbox folder. It seems like a small, somewhat silly gripe, but it’s clearly one that enough people have had trouble with: Since launching on July 10th, Plug’s Kickstarter funding has already hit $635,000, far outpacing the $69,000 goal.

Marcombes is also making a big privacy play with the Plug, which essentially lets owners create their own private clouds free of government snooping.

“The cloud is a bit dangerous. If I put things there, I don’t feel like I own my data. PRISM has shown us that it’s not crazy to think like that,” he said.

But while the cloud seems unsafe, it’s pretty secure, relatively speaking. Plug, in contrast, seems like ticking security time bomb: With all of your files exposed to the Internet, how soon will it be before bad guys (or, yes, even the NSA) get access?

Marcombes’s defense is fairly straightforward: All of Plug’s transmissions are encrypted so that not even it has access to the data of Plug owners.”We try to make Plug as secure as we can,” Marcombe said.

How secure Plug really is remains to be seen, but it probably can’t be any less secure than most the cloud services we’re using today. Either way, we’ll know in December when the device is expected to ship to Kickstarter backers.