Precursor Games isn’t relaunching its second Kickstarter campaign for Shadow of the Eternals empty-handed. It’s adding a new fundraising goal, a potential new platform, and a new voice that you just might recognize.

After the independent developer canceled its first two crowdfunding efforts in June, Shadow of the Eternals is back on Kickstarter today with the new goal of $750,000. That is significantly less than what Precursor previously asked for on its website ($1.5 million) and on its original Kickstarter page ($1.35 million). According to chief operating officer Shawn Jackson, this amount is “more accessible to people” than the previous ones.

Community feedback has heavily influenced the structure of the game. As a result, Shadow of the Eternals will no longer follow the episodic format: Instead of splitting into 12 two-hour chunks, it will now be a single eight-to-10 hour experience. This is good news for fans who want a similar experience to Eternal Darkness: Sanity’s Requiem, a GameCube-only release that became a cult classic thanks to its clever use of psychological horror. Shadow of the Eternals is the spiritual successor to Eternal Darkness (which Nintendo still owns). The third-person action-adventure game borrows some of those same horror elements as it tells a story that takes place at different points in history.

A new addition to the cast is veteran voice actor David Hayter, who plays detective Paul Becker, the lead character. Hayter adds some star power to the game. He is best known for his long stint as Solid Snake and Big Boss in Konami’s Metal Gear Solid series, and he even played a few characters in Eternal Darkness.

“Playing the role of Paul Becker will be a blast as he is both complex and conflicted,” said David Hayter in a statement. “I intend to provide gamers with a provocative and memorable experience on the roller coaster ride that is Shadow of the Eternals.”

If Precursor raises $750,000 or more, it plans on releasing Shadow of the Eternals for Wii U and PC in late 2014. But if it hits one of the stretch goals — saying only if the final amount “sufficiently exceed our target goal”  — the developers will release the game on the PlayStation 4 as well. 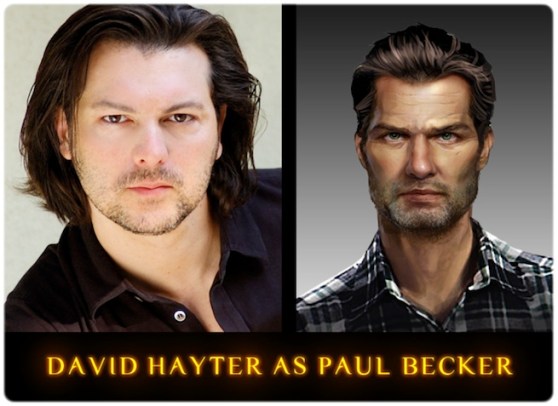 Above: Veteran voice actor David Hayter and his role in Shadow of the Eternals.

Why Precursor Games took a ‘break’

Precursor says it has learned a lot from the previous campaigns, which at the time of their closure, didn’t look like they were going to hit their million-dollar targets.

“We had a lot of messages going out at once,” Jackson said. “I think what we needed to do was consolidate our messages. And that’s also one of the reasons why we wanted to restart the Kickstarter, because we had a lot of opportunities come up [like becoming official PS4 developers during the break, specifically for Shadow], and the only way to integrate those opportunities was to relaunch our Kickstarter. Once you’re locked in, you’re locked in on that campaign. It was the best option for us.”

“It just made sense,” said chief creative officer Denis Dyack. “We learned so much. I just think that as a new company really unfamiliar with Kickstarter and crowdfunding, we learned so many things, and it just made sense to do that … plus you take all these opportunities, plus more that we’re going to be announcing in the future. It was just the logical choice.”

The drama surrounding Dyack and his former company, Silicon Knights, might have overshadowed the first two campaigns (and may still affect this latest one). Anonymous sources from a Kotaku report last year allege that, among other things, Dyack pulled senior staff members off the X-Men: Destiny team to work on an Eternal Darkness 2 demo. Then Silicon Knights fell apart after it lost a long legal battle against Epic Games. And just a month ago, Precursor Games was quick to distance itself from artist and cofounder Kenneth McCulloch when police arrested him on child pornography charges. 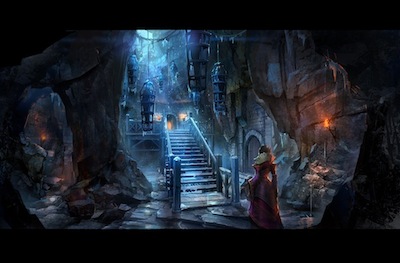 Above: Concept art for Shadow of the Eternals.

That’s a lot of baggage for a new studio to carry while it’s trying to raise money from the public. Jackson stressed that the team has to remain “open and honest” with the community. Both Jackson and Dyack have addressed some of these issues already.

“That’s the first rule that we went into with this company,” Jackson said. “When you’re dealing with the community, as what we are doing right now, you have to be honest with them and transparent. So that is the key to dealing with it, to approaching that stuff.”

“There’s always that noise,” Dyack said. “And there’s always gonna be that noise. But at the end of the day, we hope people look to the game and say, ‘Is this worth supporting?’ And we think it is. And … hey, I’ve already gone out there and said I’ve made some mistakes in the past and said some things I shouldn’t have said, but if you look at — Precursor’s a new company — the number of games that [Silicon Knights] has done, we’ve made some great games, too. So … we think it’s worth it.”

Though Precursor Games does have other funding coming in (it’s not quite ready to reveal who exactly is providing that money just yet), it says it “definitely” needs that $750,000 to finish the game.

“Without that support, we can’t do it,” Dyack said.