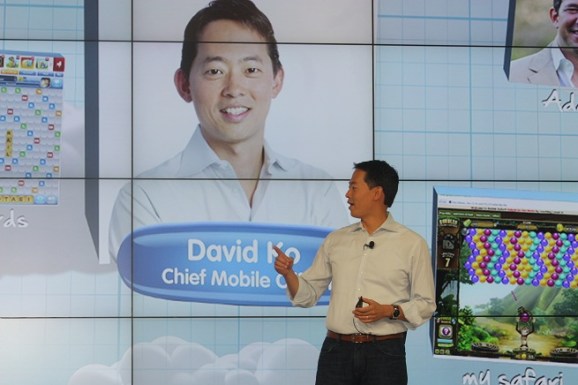 Zynga chief operations officer David Ko said in an analyst conference call today that the company decided not to invest in U.S. real-money online gambling because it needs to stay focused on social gaming and its core casual audience.

The San Francisco company slightly beat Wall Street expectations, but it continues to bleed users. This, and the decision to withdraw its plans to bid for real-money online gambling licenses in the U.S., led to a tumble in the company’s stock price after-hours trading. The stock is now down about 12 percent to $3.05 a share.

Ko noted that Zynga Poker, the company’s big money maker, slipped in the second quarter because “competitors are closing the gap.” The poker game competes with rivals such as Double Down Interactive and other social casino game companies. Ko said Zynga saw a decline in part because of a rise in “illegitimate credit card activity” on the web, where people pay for virtual poker chips with credit cards. He said he believes the growth in poker is in the casual end of the market, not the real-money gambling side.

“We must stay focused on our priorities. … The decision we made around real-money gambling was around focus,” Ko said after a question from an analyst on the call. He said the company needs to execute on its existing social games.

This change is the first big one since Zynga got a new boss. It hired Xbox boss Don Mattrick as its new CEO on July 1, shifting founder Mark Pincus to chairman and chief product officer. That gave the stock a bounce in the past few weeks, but the mostly dour report is causing investors to think twice.

Pincus introduced Mattrick on the analyst call, saying that he “shares my visions for social gaming” and that he shares his passion for gaming. Pincus said Mattrick set up his office in the middle of the FarmVille studio on his first day, a sign that Mattrick will be focused on games.

“I am here to support Don in whatever way I can,” Pincus said.

In June, Zynga said it expected a loss of 3 cents to 4 cents per share on revenue ranging from $225 million to $235 million. Last year, Zynga’s second quarter revenue came in at  $332 million and earnings per share loss of 3 cents to 5 cents. The company also made cutbacks at various game studios around the world.

Monthly active users were 187 million, down 39 percent from 306 million a year ago and 253 million in the first quarter. Monthly web numbers were 129 million and mobile was at 57 million.

Zynga has 2,368 employees today. Mattrick said that he met Pincus when the company had just 100 employees, but he described the chance to join Zynga now as a once-in-a-lifetime opportunity. He noted the firm has $1.5 billion in cash and investments. The aim is to make games social and accessible to everyone.