Zynga reported earnings today for the second quarter that beat Wall Street’s expectations by a sliver, but the social gaming company’s stock price is falling in after-hours trading as the it continues to lose a lot of players.

Zynga hired Xbox chief Don Mattrick as its new CEO on July 1, shifting founder Mark Pincus to chairman and chief product officer. That gave the stock a bounce in the past few weeks, but the mostly dour report is causing investors to think twice.

In June, Zynga said it expected a loss of 3 cents to 4 cents per share on revenue ranging from $225 million to $235 million. Last year, Zynga’s second quarter revenue came in at  $332 million and earnings per share loss of 3 cents to 5 cents. The company also made cutbacks at various game studios around the world.

Zynga traded at $3.28 a share on Wednesday. That is a healthy premium compared to below $2.60 a share in the days before the company announced Mattrick as the new CEO. But questions remain about Zynga’s capability to shift into mobile games, where Mattrick has little experience. In after-hours trading, Zynga is down 13 percent to $3.08 a share. During the trading day before the release came out, Zynga’s stock price was up 6 percent.

“The next few years will be a time of phenomenal growth in our space, and Zynga has incredible assets to take advantage of the market opportunity,” said Mattrick in a canned statement. “To do that, we need to get back to basics and take a longer term view on our products and business, develop more efficient processes, and tighten up execution all across the company. We have a lot of hard work in front of us, and as we reset, we expect to see more volatility in our business than we would like over the next two to four quarters. I’m privileged to lead Zynga, and I look forward to spending more time with our players, employees, and shareholders.”

Rivals have been eating into Zynga from all directions. King’s Candy Crush Saga is now a bigger game on Facebook than any of Zynga’s titles. King is No. 1 with more than 147 million monthly active users on Facebook, while Zynga is at No. 2 with 135.9 million. Zynga’s highest-ranking Facebook game is FarmVille 2 with 33 million players, but Candy Crush Saga has more than 44 million.

Facebook reported earnings yesterday. Zynga recently released its Dojo Mojo action-strategy game on Facebook. But the competition remains stiff. For the third quarter, analysts expected Zynga to report a loss of 2 cents a share on bookings of $193 million.

In the quarter, Zynga said it released six new titles, including Hidden Shadows on the web, War of the Fallen, Draw Something 2, Battlestone, Solstice Arena, and Running With Friends. Zynga said that as of June 30, it had three of the top 10 games on Facebook based on daily active user counts.

The company said its Zynga.com destination site had 4.2 million monthly active users. FarmVille and FarmVille 2 bookings grew 29 percent compared to a year ago.

Monthly active users were 187 million, down 39 percent from 306 million a year ago and 253 million in the first quarter. Monthly web numbers were 129 million, and mobile was at 57 million.

Ad revenue in the second quarter was $27 million, down 33 percent from a year ago and down 19 percent from the first quarter. 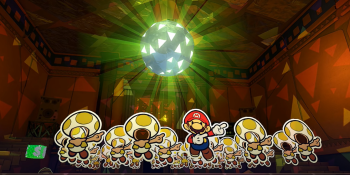